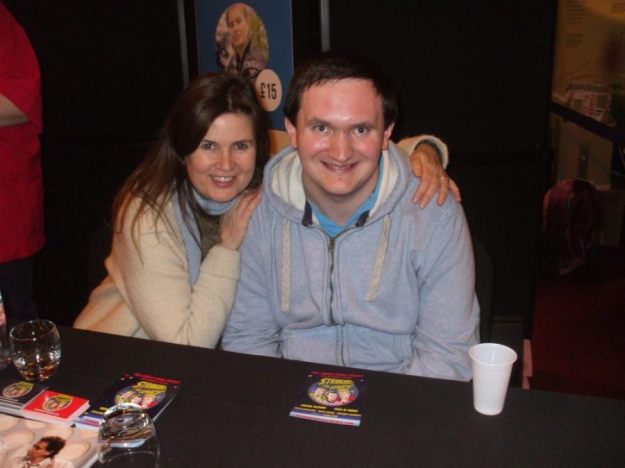 I’ve had a mention in a Big Finish CD interview! Yippee! 😀

I just found out today that Sophie Aldred mentioned my name in the CDs interviews for the Big Finish audio ‘A Life of Crime’, the first of a new trilogy of stories featuring the Seventh Doctor, Ace and Mel, starring Sylvester McCoy, Sophie Aldred and Bonnie Langford. I’m gobsmacked and thrilled!

I gave Sophie the timeline of Ace at the ‘Science of the Time Lords’ event in Leicester, earlier this year in January 2016. I recalled how impressed she was when I gave Ace’s timeline to her. I wasn’t expecting to get a mention by Sophie in a Big Finish CD interview about Ace’s timeline! I’m like WOW now!

‘A Life of Crime’ was recorded on the 2nd to the 3rd of February 2016. When I saw Sophie at the ‘Science of the Time Lords’ event in Leicester, it was on the 30th January 2016. So it was only a few days later when Sophie remembered the Ace timeline I gave to her and she mentioned me in the CD interview.

I’m pleased my Ace timeline has been helpful and useful to Sophie. It’s made my day to hear my name mentioned by Sophie in a Big Finish CD interview and to hear her tell Bonnie Langford about my ‘Doctor Who’ timelines. Ace’s timeline has been updated a lot since I gave a copy of it to Sophie. I’m so glad that I’ve made my mark and am now famous at last! 😀

If you want to hear my name mentioned by Sophie Aldred, purchase ‘A Life of Crime’ from Big Finish!

Also check out Ace’s Timeline from ‘The Companions Timelines Index’ in ‘Doctor Who Timelines’.

There’s also my Short Trip with Ace and the Seventh Doctor called ‘The Space Car’ in the ‘Short Trips by Tim Bradley’ section.

4 thoughts on “Sophie Aldred mentioned me in a Big Finish CD interview!”