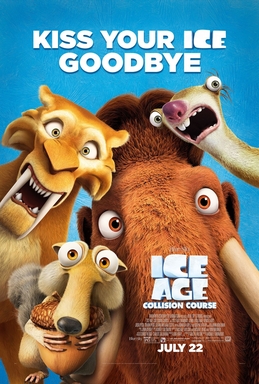 Are you getting a heat-wave where you are at the moment? Perhaps you need to cool down with seeing this ‘Ice Age’ movie at the cinema! 😀

I’ve now seen ‘Ice Age: Collision Course’, the fifth film in the ‘Ice Age’ movie series at the cinema! I enjoyed seeing this ‘Ice Age’ movie! I don’t think it’s the best out of the series, but I found it great fun to watch. It was nice to see the ‘Ice Age’ characters that included Manfred, Sid, Diego and Scrat.

I saw a preview of this movie at the cinema in the form of the short film ‘Cosmic Scrat-tastrophe’. This movie is bonkers, as Scrat wakes up an alien spaceship with his acorn and he causes the end of the world when the ship crashes into an asteroid and it breaks up before it crashes onto the Earth.

The comedy’s not as great as the previous ‘Ice Age’ films have been. Also I felt there were too many characters to keep track of, since the first ‘Ice Age’ movie started with just Manny, Sid and Diego. I was pleased however to see Buck the weasel, who returned from ‘Ice Age: Dawn of the Dinosaurs’.

The story is ludicrous, as our mammal heroes try to save the world by dropping some magnetic crystals into a gigantic volcanic crater. I did my best not to take the story too seriously. I found it nice to see Peaches, Manfred and Ellie’s daughter getting married to Julian, a new character in the ‘Ice Age’ film series.

‘Ice Age: Collision Course’ has been an enjoyable movie experience. I enjoyed hearing the voices of Ray Romano, John Leguizamo, Denis Leary and Simon Pegg as Manny, Sid, Diego and Buck. There were a lot of characters to keep track of and the story is ludricous, but it is very good entertainment.

At the moment, I think the ‘Ice Age’ movie series should end here, as there have been too many ‘Ice Age’ movies made so far. But I have read that there’s going to be an ‘Ice Age 6’ in the making soon! 😀

This is definitely a movie to ‘cool down’ after a hot day in the summer, isn’t it? 🙂