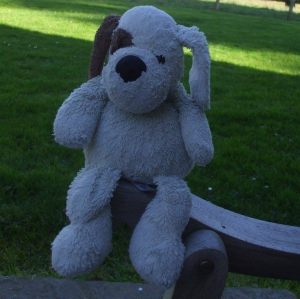 (Err…I’ve managed to translate Cuddles’ doggie language into English for readers to read.)

My name is Cuddles!

My master has allowed me to share my memories of seeing Sarah Sutton at ‘Doctor Who’ conventions!

I love Nyssa! I also love Sarah Sutton and seeing her at conventions! I rarely see Sarah at conventions because of my master! Grrr!!!! But my master sometimes does let me see Sarah and there are times when I see her without my master even looking. Let me share with you my meetings with Sarah. 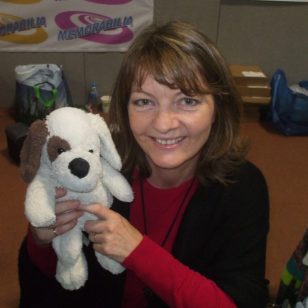 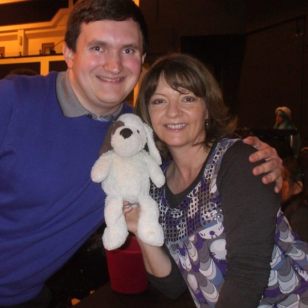 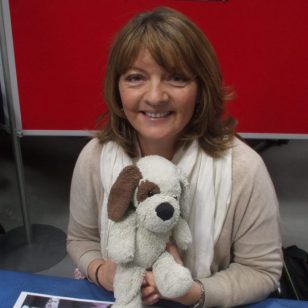 Cuddles with Sarah Sutton at the ‘Stars of Time Film and Comic Con 2016’, Weston-super-Mare, May 2016 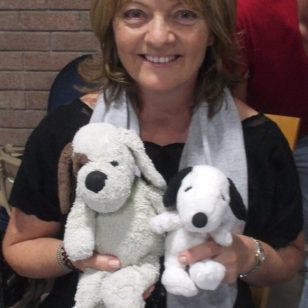 Cuddles with Sarah Sutton and Snoopy at the ‘Stars of Time Film and Comic Con 2016 @ The Tropicana’, Weston-super-Mare, August 2016

The first time I met Sarah was at a ‘Memorabilia Birmingham’ event in November, 2011. Sarah was in awe of me and told me I was cute. I had my photo taken with Sarah on that day. I couldn’t wait to see Sarah at another convention. I told my master to take me, but he wouldn’t listen to me! Grr!!!!

This year, I saw Sarah twice at conventions. At the ‘Stars of Time Film & Comic Con’ at the Helicopter Museum in Weston-super-Mare, I managed to sneak a lift in my master’s rucksack. I fell out and Sarah found me, putting me on her table where she was signing. I was pleased about that!

My master came back to find me where I was with Sarah, and took me away from her. He gave me a telling off and I told him to take me back to her. Eventually I had a photo with Sarah on that day, which happened to be my master’s birthday. It was also my birthday too. And I’m still a little doggie!

Recently, I saw Sarah at the ‘Stars of Time Film & Comic Con @ The Tropicana’ in Weston-super-Mare. Sarah was pleased to see me. She told me I was cute again and wiggled my nose. I had a photo with Sarah, and also with Snoopy, another celebrity, who had come to see Sarah on that day as well. 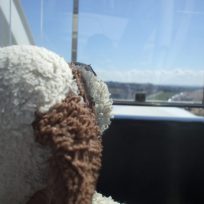 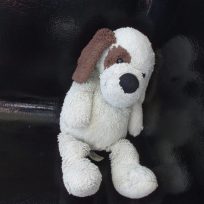 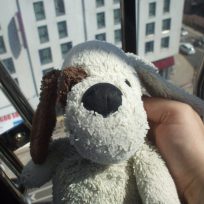 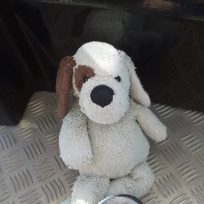 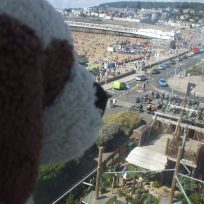 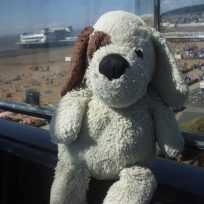 I’m looking forward to seeing Sarah again at another convention. Whether my master will let me is another matter. But I know that Sarah will pleased to see me as it’s a fact that I’m cute and cuddly!

By the way, I also went to Barking to see Sarah at conventions when my master wasn’t around. I was ‘barking mad’. (giggles)

No you didn’t, Cuddles!