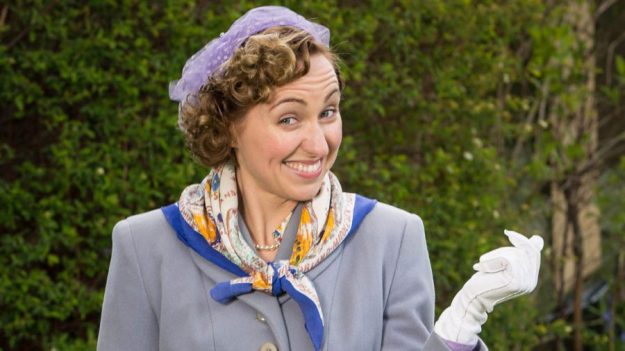 ‘Young Hyacinth’ is set 40 years before the events of ‘Keeping Up Appearances’, so that’s in the 1950s. The prequel stars Kerry Howard as Hyacinth, with Mark Addy as Daddy, Talma Kari as Violet, Katherine Pearce as Daisy and Katie Redford as Rose. Sadly the characters of Richard and Onslow don’t appear in this.

So what did I make of this? Well…it was interesting! But it didn’t have the same charm and humour of the original ‘Keeping Up Appearances’ series itself. Despite the episode penned by Roy Clarke, the original author of the series, and with some in house-jokes to add to the sitcom, I’m afraid I didn’t find this prequel to be very funny.

Also the episode was over too quickly for my liking. It was a 30-minute episode and by the end I was like…is that it? I was expecting more background story with Hyacinth’s character development as a young person, but obviously it’s difficult to capture that in a 30-minute episode. Perhaps this is the start of a new series with ‘Young Hyacinth’?

So ‘Young Hyacinth’ was an enjoyable prequel episode to ‘Keeping Up Appearances’ but I didn’t feel satisfied with the short amount of time this episode offered. I hoped for more on why Hyacinth became the way she did with being so snobbish. But it just didn’t seem to come through. These are my personal opinions!