What do ‘The Good Life’ and ‘Ever Decreasing Circles’ have in common? 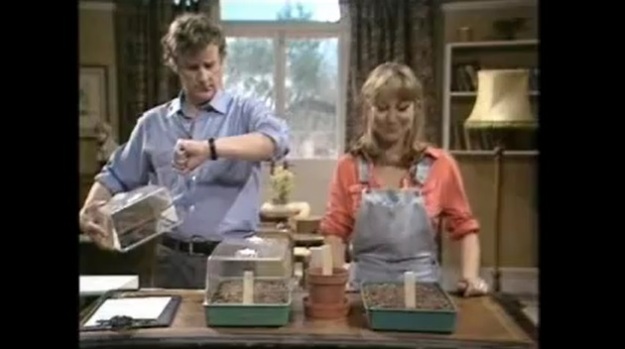 Sadly the YouTube video is unavailable due to copyright grounds. This is a temporary image.

Today, this video contains a scene from one of my favourite episodes of ‘The Good Life’ TV series. The episode is called ‘I Talk to the Trees’, which was shown in 1976 from the third series of ‘The Good Life’. In the episode, Tom and Barbara experiment with talking to plants and see how they grow.

I love this episode, as Richard Briers as Tom Good and Felicity Kendal as Barbara Good are so funny in that scene when they start their experiment to talk to plants in their house. Barbara shows love and affection to one plant whilst Tom shows derision and hate to another. The scene is so funny to watch!

The performances of Richard Briers and Felicity Kendal are so good in this scene from the episode as well as for the whole series of ‘The Good Life’. I like seeing them as the happily married couple, Tom and Barbara Good, who try to make their life of self-sufficiency at their suburban house in the 1970s.

‘The Good Life’ is a great comedy series made in the 1970s with Richard Briers and Felicity Kendal in it. I love re-watching the series when I get a chance on DVD. I hope I’ll get to review this comedy series on ‘Bradley’s Basement’ as well as ‘Ever Decreasing Circles’ which also features Richard Briers.