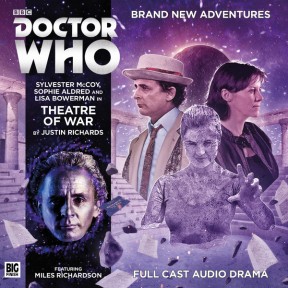 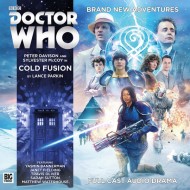 I’ve now finished listening to a bundle of ‘Doctor Who’ audios! These are the Novel Adaptations on five ‘Doctor Who’ novels published in the 1990s! I’ve enjoyed all five stories, as they have been interesting tales from the period when ‘Doctor Who’ was unloved by the BBC but loved by the fans.

All of the five stories feature Sylvester McCoy as the Seventh Doctor. The first four include ‘Nightshade’, ‘Theatre of War’, ‘All-Consuming Fire’ and ‘Original Sin’. The audio adaptation highlight for me was the fifth adventure, ‘Cold Fusion’, featuring the Fifth Doctor and the Seventh Doctor in it.

I managed to obtain the first four adventures on CD in the post. Unfortunately I didn’t get ‘Cold Fusion’ for Christmas as Big Finish informed us that there was a delay with the manufacturing of the CDs. But I did hear this story via download for Christmas and I’m hoping to receive my CD copy of the story in January.

I listened to all five stories in chronological order according to my ‘Doctor Who Timelines’. Each of the five stories were different in nature and I was more familiar with ‘Cold Fusion’ from reading the book twice. But they’ve been enjoyable and have significant connections with the history of ‘Doctor Who’.

‘Nightshade’ is a story by Mark Gatiss and adapted by Kyle C Szikora for audio. It features Sylvester McCoy as the Doctor with Sophie Aldred as Ace. I enjoyed this audio adventure so much, as it was interesting to hear Matt Gattis’ earliest contribution to ‘Doctor Who’ in the novels. It was also very lovely hearing scenes with Sylvester’s Doctor and Ace when he talks about considering retirement.

‘Theatre of War’ is a story by Justin Richards and features Sylvester McCoy as the Doctor with Sophie Aldred as Ace and Lisa Bowerman as Bernice Summerfield. This is an intriguing tale where the TARDIS trio visit a planet with a life-size version of a Shakespeare play. This is also a very interesting tale in that this features the first appearance of Miles Richardson as Irving Braxiatel in ‘Doctor Who’.

‘All-Consuming Fire’ is a story by Andy Lane and adapted by Guy Adams for audio. It features Sylvester McCoy as the Doctor with Sophie Aldred as Ace and Lisa Bowerman as Bernice Summerfield. It also features Nicholas Briggs as Sherlock Holmes with Richard Earl as Dr. Watson. This was an unusual but fascinating story to have the Doctor and Sherlock Holmes join forces in this.

‘Original Sin’ is a story by Andy Lane and adapted by John Dorney for audio. It features Sylvester McCoy as the Doctor with Lisa Bowerman as Bernice Summerfield. It also features the first appearance of Travis Oliver as Chris Cwej and Yasmin Bannerman as Roz Forrester, who become new companions to the Doctor. The villain of this story has this very certain connection to ‘The Invasion’.

But it was ‘Cold Fusion’ that was my favourite out of the five ‘Doctor Who’ audios for Christmas. I loved the audio adaptation of ‘Cold Fusion’ as I found it brilliant. It’s a story by Lance Parkin and features Peter Davison as the Fifth Doctor and Sylvester McCoy as the Doctor, with Sarah Sutton as Nyssa, Janet Fielding as Tegan, Matthew Waterhouse as Adric, Travis Oliver as Chris Cwej and Yasmin Bannerman as Roz Forrester. I was very pleased they added something new to the ending of the story.

The latest Novel Adaptations of ‘Doctor Who’ have been a joy to listen to over this Christmas. I’m looking forward to listening to these stories again and write up detailed reviews on them. I also hope that Big Finish are considering to adapt some more novels into audio like ‘Goth Opera’, my favourite!

Check out my current book review of ‘Cold Fusion’ here on ‘Bradley’s Basement’.