This is a response to the documentary ‘Lies, Cheques and Videotape’ which was released on the ‘Revenge of the Cybermen’ DVD in ‘Doctor Who’! I enjoyed that documentary so much as it was an interesting and insightful look into how fans saw classic ‘Doctor Who’ stories through the videos.

Weeks after I saw the DVD documentary about ‘Doctor Who’ videos, I met one of the fans who had been interviewed in that documentary at the ‘Regenerations 2010’ convention in Swansea, September 2010. His name was Paul Jones and he happened to be a steward at that convention.

I enjoyed chatting with Paul about his involvement in the documentary and his memories of ‘Doctor Who’ videos. I shared my memories with him about video recording during the 1990s and it was interesting to compare his memories of mine from both the 80s and 90s perspectives.

I will be sharing my thoughts about the points addressed in the DVD documentary. But first, I would like to share some of my memories about watching and recording videos when I was a kid. It was a happy time for me when I was growing up and it’s very amazing that things have changed since then.

These days we take DVDs and Blu-ray for granted. But in those days during the 80s and 90s, it’s astonishing that we were using VHS tapes and video recorders to watch the things we wanted to watch. I was excited by the videos and video recorders that I didn’t think we would get to the DVDs. 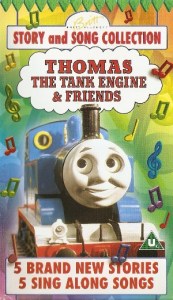 My earlier memories of watching videos were with ‘Thomas the Tank Engine’. I was so into ‘Thomas’ as a kid before ‘Doctor Who’. I enjoyed re-watching the ‘Thomas’ videos that we had at home and I was always looking forward to seeing the next video that my parents would buy me!

I also watched videos of other children shows that I enjoyed from my childhood. They included ‘Sooty’; ‘Fireman Sam’; ‘Postman Pat’; etc. I’m so gobsmacked that I watched those TV shows when I was a kid and I kept re-watching them again and again on video and TV as I grew up back then.

I remember when I was watching those children’s videos, I used to be scared by the video idents shown at the beginning. This included the BBC Video Idents from the 80s and 90s as well as The Video Collection idents. The YouTube video below contains some of those video idents that I recall very vividly.

I can’t remember the first video I recorded from the TV. But I do have happy memories of recording episodes of ‘Power Rangers’ and ‘Beast Wars’ onto videos. I was really into those action-packed TV shows as a kid and I recorded the episodes to enjoy and watch now and again.

I was very excited whenever ‘Power Rangers’ and ‘Beast Wars’ had their own VHS releases. I remember that I wanted to watch Season 3 of ‘Beast Wars’, but I couldn’t get to see it on TV. Then they announced that ‘Beast Wars’ Season 3 would be released on four VHSs and I was delighted. 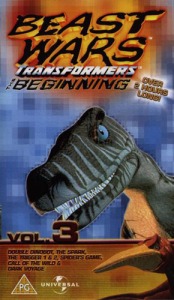 I also recall that my parents and I were lent videos of the ‘Fawlty Towers’ series by Nana and Bamp in Newport. I was rather young at the time and I enjoyed re-watching those ‘Fawlty Towers’ episodes on VHS. Those were the original VHS releases of ‘Fawlty Towers’ from the 80s!

Anyway that’s enough video memories from me! It’s time to talk about the DVD documentary about ‘Doctor Who’ and videos on the ‘Revenge of the Cybermen’ DVD. I didn’t watch ‘Doctor Who’ as a kid in the 90s, since my parents never bought me the videos that were released back then.

It’s probably just as well I didn’t watch ‘Doctor Who’ on video as a kid, as I would probably have been too scared or ended up being a spoiled brat from watching them. 😀 I was amazed by how videos and video recording had developed a lot from its inception right through the 80s and 90s.

First of all, I was aghast by the prices that videos cost in those days from the 80s and 90s in that documentary. Videos in those days cost at about £10! I wasn’t aware of the price range for those videos and it’s probably why I didn’t have so many ‘Thomas’ videos when I was a little kid. 😀

I was intrigued that repeats were rare for ‘Doctor Who’ during the 80s. I’m sure that many fans relished watching ‘The Five Faces of Doctor Who’ season and recorded the stories on videotape before they were wiped. I recorded lots of episodes over used-tapes and I wiped other shows in the process. 😀

I was also fascinated that fans in the UK saw ‘Doctor Who’ episodes recorded on VHS by fans in Australia. It’s astonishing that the BBC weren’t willing to release ‘Doctor Who’ stories on VHS so readily and so speedily before ‘Revenge of the Cybermen’ was released in 1983 on BBC Video.

I sympathise with those fans that had to cope with the varied picture quality of the videos being recorded with ‘Doctor Who’ episodes on it. I sometimes had videos with poor picture quality on it. By the time my video player was dying, those videotapes got damaged with some scratches. 😦

It was also interesting that fans were surprised by the lack of black-and-white stories of ‘Doctor Who’ with William Hartnell and Patrick Troughton, as some were missing from the BBC Archives. Many of those ‘Doctor Who’ episodes have been found over the years and some have been animated.

I found it amusing when fans compared the Target novelizations of ‘Doctor Who’ to the actual TV episodes with certain differences. I enjoyed chatting to Paul Jones about his comparison between ‘Frontier in Space’ and ‘The Space War’ novelization and how the Ogrons’ pet monster had appeared.

I’ve never entered the black market and purchased pirate copies of films and TV shows that I wanted to see. I’m amazed that the fans from the documentary went to those great lengths to see the ‘Doctor Who’ episodes by pirate video collectors. I’m sure the picture quality wasn’t very good.

‘Revenge of the Cybermen’ is interesting as the first ‘Doctor Who’ story to be released on video. It must have been exciting for fans to see the video, albeit compiled into 60 minutes without the episode endings. The packaging of the video looks interesting with the wrong Cyberman on it! 😀 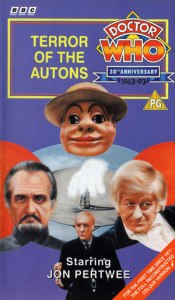 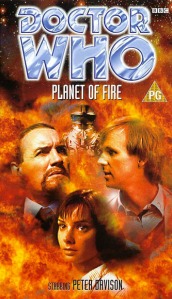 I saw some ‘Doctor Who’ videos at a friends’ house in England before seeing them on DVD. They included ‘Terror of the Autons’, ‘City of Death’ and ‘Planet of Fire’. It was intriguing to see those stories on that format. I’m sure fans were thrilled when the videos were released during the 1990s and early 2000s.

Nowadays VHSs have been forgotten and are replaced with DVDs and Blu-ray. It’s extraordinary to think that I was watching and recording VHSs during the 90s and it has now become extinct. There is more availability with the DVDs with superb picture quality and lots of special features.