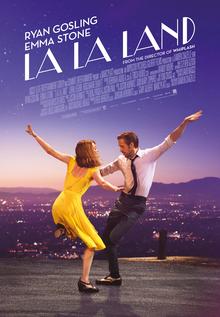 I’ve now seen the movie ‘La La Land’ at the cinema this year for January 2017! I greatly enjoyed seeing this film! It’s a modern-day movie musical, but has the classic flavour of some of the movie musical hits from the 1930s, 40s, 50s and 60s! It’s a movie that has jazz music and lots of colour in it!

The film sees Emma Stone as Mia who is a struggling actress working at Hollywood studios. She then meets Ryan Gosling as Sebastian who is a struggling jazz pianist. Both gradually fall in love, as they set out on their dreams to success with Mia being a movie star and Sebastian setting up his jazz club.

I really liked how this movie blends in with the modern and nostalgic aspects of today’s society in terms of music. The movie reinforces the jazz-style music all over again, especially as Mia and Sebastian dance to the music they love.

Most of the movie was pretty good for me in terms of the middle section where Mia and Sebastian are falling in love. It gets interesting when the couple’s relationship becomes strained as their dreams for success start to go off in different directions. There is a surprise ending to the film!

I really liked the dream sequences featured in this movie, especially in the epilogue where Mia and Sebastian danced together as if it was from some 1950s Hollywood musical. The storyline moves through the seasons from Winter to Spring to Summer to Autumn and back to Winter, which I liked.

‘La La Land’ has been a very enjoyable if unusual movie musical, with great performances by Ryan Gosling and Emma Stone in the lead. My Dad certainly enjoyed this film and I’m sure it will be talked about for years to come, especially since it seems to have won lots of awards at the Golden Globes.

By the way, I recognised J. K. Simmons appearing in ‘La La Land’, as he played J. Jonah Jameson in the original ‘Spider-Man’ movie trilogy!