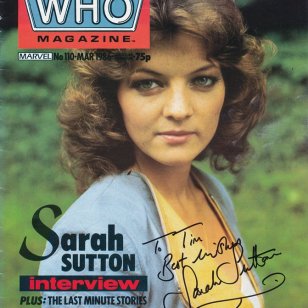 This is a collector’s item worth having and I’m very pleased that I purchased it from Amazon.co.uk!

As you may (or may not) know from my ‘Nyssa Challenge’ reviews, I’m a huge fan of Sarah Sutton/Nyssa of Traken in ‘Doctor Who’. Over the years, I’ve been collecting memorabilia of Sarah/Nyssa. These include photographs, rare autographs and some items that are related to Sarah.

When I discovered issue #110 of ‘Doctor Who Magazine’ available from Amazon.co.uk online, I was keen to purchase it. Reading through this issue of ‘DWM’, published in March 1986, has been extraordinarily pleasing and invigorating. Not only was I enjoying an interview with Sarah Sutton (the highlight of the magazine for me really), but I was also reading a certain product of history in ‘DWM’.

I’ve written letters to ‘DWM’ about Nyssa/Sarah Sutton and two of them have been published in the ‘Galaxy Forum’ column. One of these letters was asking ‘DWM’ for a new interview with Sarah to share her memories of Nyssa and what she thinks of the series today. So far, nothing’s come about.

I have had one fan from America supporting this idea in another ‘DWM’ two issues later. I live in hope that an interview with Sarah is imminent and will be worth waiting for. I was delighted to be reading Sarah’s interview done back in 1986 for this issue #110 in ‘DWM’ and also hear her thoughts.

I’ve now added my copy of issue #110 of ‘Doctor Who Magazine’ signed by Sarah Sutton at the ‘Stars of Time’ convention in Weston-super-Mare, July 2012. The issue has a lovely front cover as it features the photo of Sarah/Nyssa in her ‘Mawdryn Undead’ costume, which is one of my favourites.

The items included in this ‘DWM’ issue are very different to the level of content that is contained in ‘DWM’ today. The contents page is very limited and not very verbose as current ‘DWM’ is. But it was lovely reading and seeing how ‘DWM’ published its issues back in the 80s and how limited it seemed.

There’s a ‘To The TARDIS’ which is like the ‘Galaxy Forum’ section of ‘DWM’ today, as it contains fan letters sent to the magazine on various topics. These include letters by fans from places like Cardiff and Australia on the series’ availability down under as well as asking about the upcoming Season 23.

There’s part 1 of an article by Richard Marson called ‘At The Eleventh Hour’, which looks into the delivery of last-minute scripts of stories during the 1960s. This was interesting as I enjoyed reading about how stories like ‘The Mind Robber’; ‘The Invasion’; etc. were delivered at the very last-minute.

There’s the ‘Matrix Data Bank’, which is an additional fan-letter request section that has ‘DWM’ responding to questions from fans about certain things about the magazine. It also reveals the winners of certain competitions given out to readers of the magazine, which was interesting to see.

There’s the famous ‘Gallifrey Guardian’ which felt very familiar to me in ‘DWM’. It was shocking though as the ‘Gallifrey Guardian’ back in 1986 is smaller than the one today. I liked some of the news items including a statement from Colin Baker who announces on making a start with Season 23.

There’s also a tribute to Valentine Dyall, which was made following the tragic death of the veteran actor after he passed away in 1986. Valentine Dyall is well-known for playing the Black Guardian in the series and it was interesting to read how he’d started his radio appearances as the Man in Black.

There’s ‘The Doctor Who History Tour’, a satire comic featuring the Doctor and Peri on an adventure through the history of the show. It featured an amusing appearance by Terry Nation and his Daleks.

The highlight of this magazine issue for me of course is the SARAH SUTTON interview! The interview is conducted by Richard Marson. I love Sarah’s interview in ‘DWM’. It may seem dated, but it was very lovely to read some of the familiar comments about certain stories that Sarah had appeared in.

I love how the interview explores a brief history of Sarah’s earlier work before doing ‘Doctor Who’. Sarah comments on the stories she worked on and the actors she worked with like Peter Davison, Janet Fielding and Mark Strickson. This ‘DWM’ interview must have been done before Sarah did her ‘Myth Makers’ interview with Nicholas Briggs, which I enjoy seeing a lot when I get a chance on DVD.

I’ve met Sarah at a lot at conventions and have developed an easy-going rapport with my favourite ‘Doctor Who’ companion, talking about various topics other than ‘Doctor Who’. I’ve now conducted my own interview with Sarah which is called ‘A Conversation with Sarah Sutton (Nyssa in ‘Doctor Who’) by Tim Bradley’. This can now be viewed online via YouTube or my ‘Bradley’s Basement’ blog.

There’s a brief interview with one of the Production Team people following Sarah’s interview and that is with assistant floor manager Val McCrimmon. Although I found Val’s interview intriguing with technical aspects to making ‘Doctor Who’, I didn’t find it as enlightening as Sarah Sutton’s interview.

There’s a comic strip adventure in this issue of ‘DWM’ and it’s the final episode of ‘Genesis’, a Cyberman story with the Sixth Doctor, Peri and Frobisher. For the full story of ‘Genesis’, you can find it in ‘The World Shapers’ graphic novel. The story ends with Frobisher saying he’s stuck as a penguin.

There’s an ‘Off The Shelf’ section that contains a review by Gary Russell on ‘The King’s Demons’ novelization by Terence Dudley. This review is very complimentary by Gary, who details how the novelization contains greater character and story development compared to the actual story on TV.

The final item of this issue is ‘The Moral Dilemma, Part 2’, which is an article by Richard Marson looking into the moral issue of ‘Doctor Who’ stories. This looks from Tom Baker’s era to the current reign of Colin Baker’s Doctor. I like how it ended with looking forward to the future of ‘Doctor Who’.

I read this issue of ‘DWM’ with Sarah Sutton’s interview on holiday in Scotland, August 2012. I’ve recently re-read it for review and enjoyed reading it. It’s very different to how ‘DWM’ is made today and it was interesting to learn how things were done differently publishing the magazine back then.

I would love to go back there and find out what experiencing ‘Doctor Who’ was like in the 1980s and collecting the issues of ‘DWM’ month-by-month. I’m currently now waiting for the next interview with Sarah Sutton by ‘DWM’. I hope Sarah will be approached to be interviewed for today’s audience.

This is a great item to have if you’re a Sarah Sutton/Nyssa fan like me!