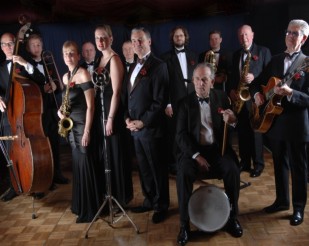 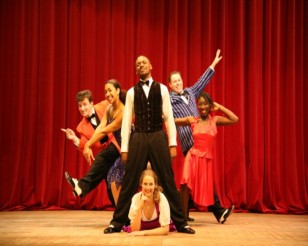 Yesterday, my parents and I went to see the concert, ‘Shake That Thing’ (or ‘The Great British Swing-Dance Show’) at the Taliesin in Swansea. Tony Jacobs was there with his Tuxedo Jazz Orchestra, the Swing Time Jivers, the Little Tunes Dixieland Band and special guest singer Catherine Sykes from the Glenn Miller UK Orchestra.

My parents and I recently saw Tony Jacobs and company at the ‘Swing That Music’ Midweek Break in May 2017. It was great attending another concert with Tony Jacobs and his group. The orchestra and dancers paid their tributes to dances, music and songs from the Roaring 20s and the Fabulous 30s.

I enjoyed the evening very much, as there were some memorable songs being performed at that concert. The first half was better than the second half, but I enjoyed the energy of the Swing Time Jivers through their dances as well as Catherine Sykes singing songs by herself as well as with Tony Jacobs.

Tony Jacobs also sang the song ‘The Teddy Bear’s Picnic’, which I’m sure is a favourite of his. I recognised the lyrics and tune of this song, as it was performed during the episode ‘The Big Parade’ from ‘Dad’s Army’. The audience also got to participate in the number, ‘Shake That Thing’, during the show.

My Dad recognised many numbers and songs in the show. Catherine Sykes sang the song ‘Comes Loves’ which according to Dad was performed by Artie Shaw. There was also ‘In a Sentimental Mood’ by Duke Ellington, performed by a saxophone player who (I can’t remember his name, sorry) guest starred in ‘Downton Abbey’ apparently.

Other songs performed that evening include ‘White Heat’, ‘You’re The Cream In My Coffee’, ‘Heat Wave’ and ‘Pagan Love Song’.

‘The Great British Swing-Dance Show’ was an enjoyable evening of entertainment for my parents and me. I found myself relaxed during the concert and enjoyed the jazz music being performed by Tony Jacobs and his company. It won’t be long before we attend another one of these jazz events. 😀