Here’s some news on some upcoming stories to be featured in ‘The Fifth Doctor by Tim Bradley’ fan-fiction series of ‘Doctor Who’. These will be released later in December 2017 and in the early months of 2018.

For December 2017, the second episode of the four episode Christmas anthology series called ‘Merry Christmas From The Doctor, Nyssa and Billy’ will be released. The first episode called ‘The Ghost of Leckwick’ was released in December 2016. The third and fourth episodes of the anthology will be released later in future years concurrently on my blog. 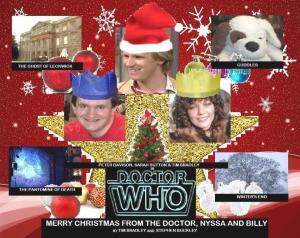 The second episode of this anthology is called ‘The Pantomime of Death’. This story is by me and my best mate Stephen Buckley and is about the Doctor; Nyssa and Billy taking part in a deadly pantomime of ‘Cinderella’ on the space station Nodnol. 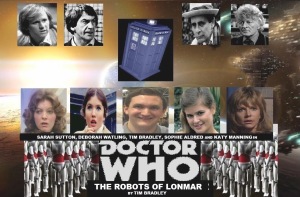 Also for December, there will be a brand-new adventure called ‘The Robots of Lonmar’, featuring five ‘Doctor Who’ companions. This is a full-length single episode adventure and will feature Victoria Waterfield, Jo Grant, Nyssa, Billy Walker and Ace where they confront robots on the planet Lonmar.

‘Dawn of the Dwaxi’ is actually a sequel to ‘Doom of the Daleks’, as it features the return of the dreaded Dwaxi from that story. It also sees Billy Walker return to his home of Churchwood Street in Cardiff during the 1960s. It will also introduce Sean Black and the Dwaxi leaders called the Directors.

‘The Stockbridge Terror’ sees the Fifth Doctor, Nyssa and Billy return to Stockbridge that featured in the ‘Doctor Who’ comics and audios. It will also feature the return of Maxwell Edison, Andrew Whittaker from ‘Circular Time: Autumn’ and the potato-headed Sontarans as the villains of the story.

I hope to write a special short story in the ‘Short Trips by Tim Bradley’ collection. This is to be a Christmas story called ‘Five Doctors for Christmas’ featuring five teams of Doctors and companions including the Second, Fourth, Fifth, Seventh and Tenth Doctors. It’ll be divided into 24 episodes and will comprise for the ‘Bradley’s Basement Advent Calendar’ for 2017. Stay tuned for updates on this.

I hope you’re looking forward to the next upcoming stories in ‘The Fifth Doctor by Tim Bradley’ series in 2017 and 2018. Stay tuned for announcements on when these new stories will be added to my blog.

In current series of ‘The Fifth Doctor by Tim Bradley’, there are the stories:

In my current ‘Short Trips by Tim Bradley’ collection, there are the stories: