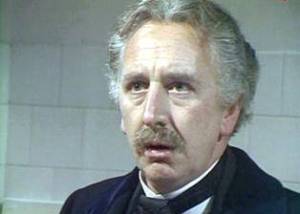 Trevor Baxter made his first appearance in ‘Doctor Who’ in ‘The Talons of Weng-Chiang’. He starred alongside Christopher Benjamin as Henry Gordon Jago, as the two made their first appearances in the ‘Doctor Who’ universe in Victorian London with Tom Baker’s Doctor and Louise Jameson’s Leela.

Although appearing in one TV story, Christopher Benjamin and Trevor Baxter reprised their roles in the Big Finish spin-off audio series ‘Jago & Litefoot’, set after ‘The Talons of Weng-Chaing’. That spin-off series became successful and lasted for thirteen seasons, which is superb and wonderful indeed!

I haven’t listened ‘Jago & Litefoot’ by Big Finish yet, but I’ve enjoyed the two gentlemen’s appearances in Big Finish through the ‘Doctor Who’ audios I’ve heard. These include ‘The Worlds of Doctor Who’ and ‘The Sixth Doctor: The Last Adventure’ and I’ve reviewed these stories on my blog.

Sadly I haven’t met Trevor Baxter in real-life at ‘Doctor Who’ conventions. But I’ve honestly enjoyed Trevor’s performances as Professor Litefoot in the stories he’s appeared in and the ones I’ve seen/listened to. He was a good balance in the double act he had with Christopher Benjamin’s Jago.

I’ve enjoyed the tributes made by the people at Big Finish to Trevor Baxter, who miss him; are saddened by his death and enjoyed working with them. Check out the BF tributes to Trevor Baxter here – https://www.bigfinish.com/news/v/rip-trevor-baxter-from-jago-and-litefoot-and-doctor-who

Trevor Baxter will be loved by many ‘Doctor Who’ fans for his portrayal of Professor Litefoot in ‘The Talons of Weng-Chiang’ and the Big Finish audios of ‘Doctor Who’ and ‘Jago & Litefoot’. I enjoyed Trevor Baxter’s performances on TV and audio and I do hope to hear more of him in the near future.

Check out the ‘Doctor Who Timeline’ for Jago & Litefoot on my blog here!