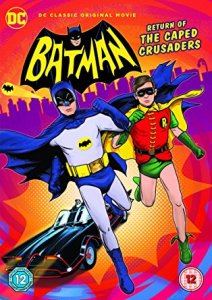 I wasn’t aware that this animated ‘Batman’ movie with Adam West and Burt Ward was made last year. I purchased the DVD whilst shopping in Cardiff in June 2017. I purchased both the ‘Batman: The Movie’ DVD and the ‘Batman: Return of the Caped Crusaders’ DVD whilst still enjoying the TV series!

‘Batman: Return of the Caped Crusaders’ sees the Dynamic Duo return to fight crime and is set sometime during the TV series. The movie also features the villains, the Penguin, the Riddler, the Catwoman and the Joker. This is like ‘Batman: The Movie’ again with the four dastardly villains here!

I’m pleased I’ve seen this ‘Batman’ animated movie with Adam West, since it’s one of the film projects he worked on before he passed away this year in June 2017. Both Adam West and Burt Ward sound older than they were from the TV series, but their enthusiasm still shines in this movie!

The animation for this ‘Batman’ movie is pretty good. The likenesses of Bruce Wayne/Batman and Dick Grayson/Robin are well captured from the TV series as well as the Penguin; the Riddler; the Catwoman and the Joker. The spirit of the TV series is also retained whilst I watched the animation.

I noticed that there are plenty of scenes in this ‘Batman’ movie where it’s set during the night. This contrasts to the TV show as most of the episodes were set during the daytime as it was bright and colourful. But that didn’t stop the movie from being enjoyable and entertaining as the TV show was.

Julie Newmar also reprises her role as Catwoman in this movie. Sadly the actors who played the Joker, the Penguin and the Riddler in the TV series passed away before this animated movie was made. But it was lovely to hear Julie Newmar, even though she too sounds older from the TV series.

The film also sees Batman becoming evil after being scratched by Catwoman’s ‘Batnip’ substance. This was a shock for me as Batman slowly became evil and it’s something that the Adam West Batman would never do. Bruce Wayne soon dismisses Dick Grayson, Alfred and Aunt Harriet from his life as well as Batman dismissing Commissioner Gordon and Chief O’Hara and taking over their roles.

As well as an evil Batman, clones of evil Batman get duplicated during the movie with the use of a diabolical replica ray by the super-villains. When the Batman clones cause trouble in Gotham City, Robin utilises Catwoman’s help. They also utilise the help of other super-villains from the TV series!

Seeing ‘Batman: Return of the Caped Crusaders’ was a pleasant, enjoyable experience for me. I’m so glad I saw this ‘Batman’ animated movie with characters from the 1960s TV series. I’m saddened that this is where the Adam West era of ‘Batman’ comes to an end as I’ve enjoyed the TV series a lot.

I’m currently looking forward to seeing the animated sequel ‘Batman: The Caped Crusaders vs. Two-Face’ with Adam West and Burt Ward. This will feature William Shatner from ‘Star Trek’ as Two-Face and was made before Adam West passed away. I hope it will come out soon either in 2017 or 2018!