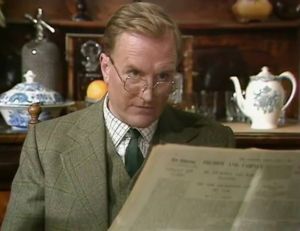 I’m saddened by the news that Robert Hardy, one of England’s finest actors, has passed away. 😦 I loved watching ‘All Creatures Great and Small’ with Robert Hardy, Christopher Timothy and Peter Davison in it, so it’s sad knowing that Robert Hardy is no longer with us as he was good as Siegfried!

Robert Hardy played Siegfried Farnon in the BBC TV drama series about vets called ‘All Creatures Great and Small’ from 1978 to 1980 as well as from 1988 to 1990. In the series, Robert Hardy played Peter Davison’s older brother and was so mesmerising to watch in his bold performance for the role.

As well as ‘All Creatures’, Robert Hardy has starred in many TV and film roles in his long career. The ones that come to mind include starring in a BBC production of ‘Northanger Abbey’ in 1986; a BBC production of ‘Middlemarch’ in 1994 and the 1995 film ‘Sense & Sensibility’. Hardy has also starred as Winston Churchill in the 1981 mini-drama series called ‘Winston Churchill: The Wilderness Years’.

Robert Hardy was meant to be attending the ‘London Film and Comic Con’ at the Olympia this year, which I attended very recently. Sadly he cancelled weeks before and it’s easy to understand why. I’m saddened I never got to see Robert Hardy in the flesh, as I wonder what he would be like to meet in person.

I will always remember Robert Hardy in his role as Siegfried Farnon in ‘All Creatures Great and Small’. I love watching that series and hope to re-watch again soon to review on my blog. It’ll be great way for me to pay tribute to Robert Hardy and see him with Christopher Timothy and Peter Davison in it.