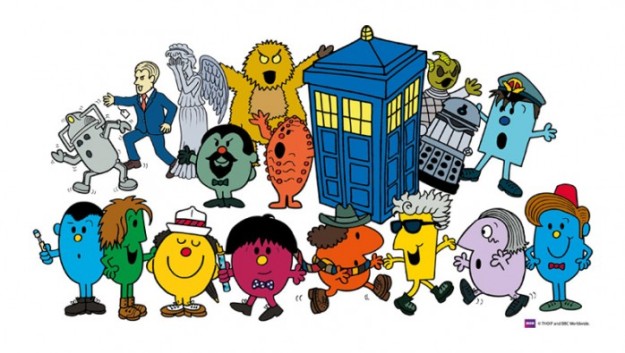 I’ve now read the latest four new ‘Doctor Who’/’Mr. Men’ books, featuring the Second, Seventh, Eighth and Ninth Doctors. These were exciting books to discover and I love how Adam Hargreaves, the son of Roger Hargreaves has interpreted these new ‘Doctor Who’ books in the ‘Mr. Men’ world.

As a kid, I used to love reading the ‘Mr. Men’ books by Roger Hargreaves! My favourite was ‘Mr. Clumsy’. These new ‘Doctor Who’/’Mr. Men’ books are a delight for me to read! The books capture the children’s book spirit of ‘Mr. Men’, whilst also evoking the ‘Doctor Who’ series at the same time.

Let’s have a look at the eight current ‘Doctor Who’/’Mr. Men’ books each in turn.

‘Dr. First’ features the First Doctor and Susan in it. I enjoyed ‘Dr. First’ very much as it was fun to see how the William Hartnell Doctor looked in ‘Mr. Men’ form. He became very grumpy in the story. The Cybermen also made an appearance in this story and it was funny when the Doctor revealed…a cat!

‘Dr. Second’ features the Second Doctor, Jamie and Victoria. I love how the characters looked in ‘Mr. Men’ form, especially Jamie. It was nice to see Victoria, but how did she know how to use a TV remote control?! 😀 The Yeti make an appearance and the Doctor says “Oh my giddy aunt!” as well.

‘Dr. Fourth’ features the Fourth Doctor and Sarah Jane in it. I really like how Tom Baker’s Doctor gets intepreted in ‘Mr. Men’ form, especially in that scarf of his. The Daleks also make an appearance in this tale. I love it when it gets pointed out that there’s only thing Daleks love – exterminating people! 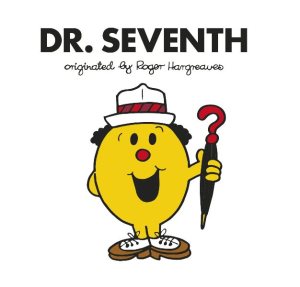 ‘Dr. Seventh’ features the Seventh Doctor and Ace in it. I’m not sure I like how Ace looks in ‘Mr. Men’ form, since it doesn’t look like Sophie Aldred to me. The Cheetah People from ‘Survival’ make an appearance in this as well as the Anthony Ainley Master. I love seeing the Master in ‘Mr. Men’ form.

‘Dr. Eight’ features only the Eighth Doctor in it. I suppose they couldn’t use Grace Holloway in this, because of the Universal license. Why not a Big Finish companion though? Anyway it was lovely to see the Eighth Doctor facing the new series Silurians and classic series Sea Devils on a sunny beach. 🙂 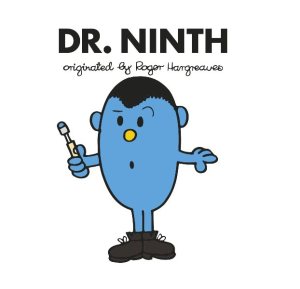 ‘Dr. Ninth’ features the Ninth Doctor, Rose and Captain Jack in it. This is an unusual ‘Mr. Men’ interpretation of a ‘Doctor Who’ story. It features the Autons in it and it seems that it has the Doctor meeting Rose for this first time. But Captain Jack is travelling with the Doctor in the TARDIS in this.

‘Dr. Eleventh’ features the Eleventh Doctor and River Song in it. This was decent enough and I enjoyed the appearance of the Zygons, the Silurians, the Weeping Angels and the Doctor looking for his fez. I wondered though why Amy and Rory did not appear in this story with Eleventh Doctor in it. 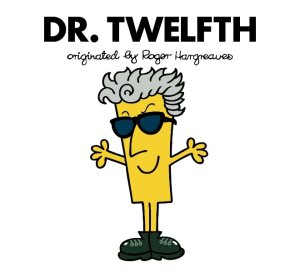 These ‘Doctor Who’/’Mr. Men’ books from the world of Hargreaves have been a joy for me to read. They’re not to be taken too seriously and it was fun to see the Doctors in their ‘Mr. Men’ forms. I did think that the idea was absurd at first, but these books have grown on me and I want to have more.

I look forward to the last set of ‘Doctor Who’/’Mr. Men’ books with ‘Dr. Third’, ‘Dr. Fifth’ and ‘Dr. Sixth’ as well as ‘Dr. Tenth: Christmas Surprise!’. I’m especially looking forward to seeing and reading what ‘Dr. Fifth’ is like. I do hope his companions Nyssa, Tegan and Adric will be in that special tale. 😀