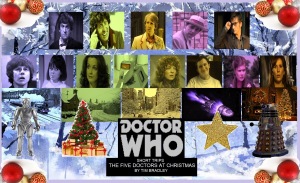 ‘The Fourth Doctor’s Story’ of ‘The Five Doctors At Christmas’ is set after ‘Foundations of Life’.

The Doctor took a mince pie from one of the plates on the buffet table. He munched on the mince pie, gulping it down. Romana watched as the Doctor enjoyed his mince pie.

“Hmm,” the Doctor nodded. “Not bad. But not as good as jelly babies.”

At that moment, the Doctor saw a plate of jelly babies on the buffet table before him. He picked the plate up and passed one over to Romana.

“Would you like a jelly baby?” he asked, taking one for himself and popping it into his mouth.

The Doctor bent down, with the plate of jelly babies in his hand. “K-9?” he asked.

“Suit yourself,” the Doctor said. He then put the plate of jelly babies back on the buffet table, before scooping some into his hand and putting them in the right pocket of his coat. This did not go unnoticed as Romana tugged him.

“They’re good jelly babies,” he insisted. “Better not to waste them.”

At that moment, a man who appeared to be in his late forties approached the Doctor, Romana and K-9 at the buffet table. He had a thin black beard and smiled, showing gleaming white teeth to the newcomers.

The Doctor looked back at the man and grinned happily.

“Greetings,” the Doctor replied, waving his right hand at him.

“I’m Dr. Sretam,” the man said. “The village doctor around here.” He took a moment to look curiously at the Doctor and Romana. “You’re newcomers in the village, aren’t you?”

“Indeed we are,” the Doctor replied cheerfully. “I’m the Doctor; this is Romana and this is our best friend K-9.”

“Say hello, K-9,” the Doctor told the robot dog at his feet.

“My, my,” Dr. Sretam said, looking admiringly at K-9 on the ground. “Is that the latest in Japanese technology you’ve got there?”

“Oh yes,” the Doctor said, trying to sound reassuring. “It’s all the rage now. K-9 was built by Professor Marius himself.”

“I see,” Dr. Sretam said. Romana wasn’t sure Sretam was convinced by the Doctor’s statement about K-9. She had to admit she wasn’t convinced either.

The Christmas music and dancing at the party got the Doctor’s attention as he attempted to change the subject.

“Indeed,” Sretam replied cheerfully. “We always have our annual Christmas party in the village whenever possible.”

“In the snow I see too,” the Doctor remarked.

“Oh indeed,” Sretam said. “It wouldn’t be a Christmas party without snow, would it?”

“But shouldn’t the villagers keep themselves warm?” Romana asked. “They don’t seem to be properly dressed for these wintry conditions.”

“Whereas you are yourself, my dear,” Sretam said, noticing Romana’s white fur attire.

Romana wrapped her fur coat tightly around herself, feeling the cold. Not just from the wintry weather, but from Sretam himself too. She couldn’t place it. There was something odd about the man. Romana wondered whether the Doctor noticed it too. But if he did, he failed to show it.

“If you’re the village doctor,” the Doctor said. “Shouldn’t you be concerned for the villagers’ well-being out in the cold? A villager catching pneumonia isn’t ideal especially for Christmas time. It’s your priority to see that the village people are enjoying themselves without illness hindering them.”

“But as you can see, Doctor; Miss Romana,” Sretam stressed to point out. “The villagers here are as happy as they can be. Look at them dancing and enjoying the Christmas festivities with the music in the background and food on the buffet table.”

“Yes,” the Doctor replied. “That’s what puzzles me.”

The Doctor leant over to Romana and whispered in her ear. “Do you notice anything, Romana?” he asked. “Anything peculiar about the way the villagers are dancing in their not so warm clothes?”

Romana was about to say she couldn’t before she realised what the Doctor was trying to get at.

“It’s like…it’s like they’re…caught in a trance. Like a hypnotic trance. Where they don’t realise it is cold and they’re deliberately ignoring it because they’ve been conditioned to.”

“Exactly,” the Doctor said. “I knew it wasn’t just me who noticed it.” He paused for a moment. “I would like to examine one of the party-goers and find out whether it’s true. That they have been hypnotised or something.”

At that moment, K-9 waggled his ears and buzzed urgently.

The Doctor got distracted and knelt down to address the little robot dog. “What’s the matter, K-9?” he asked.

Meanwhile, Dr. Sretam, who had been quiet for a while, said without warning, “Mind you, there have been strange things happening in this village of late. Strange things…that involve metal men!”

Romana became startled. “Metal Men?!” she exclaimed. “What do you mean, Dr. Sretam?”

But at that moment, K-9 cried out, “Danger, Master! Danger!”

At that moment, the Doctor, Romana and K-9 heard screams. They turned to see the villagers run and scatter from the Christmas party. The music had stopped by then.

There was a good reason why the villagers ran and scattered. The Doctor, Romana and K-9 ran too. The village was under attack…by Cybermen!