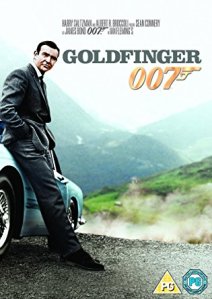 Let me share with you another DVD I got for Christmas from my best mate, Stephen. This is the James Bond film, ‘Goldfinger’, with Sean Connery. Now, I have seen this movie before when one of my other friends, David, brought it into school for us in the class to watch during one Christmas time.

It was great to have ‘Goldfinger’ for Christmas, since I knew the story and I’d seen Sean Connery as James Bond. But it was such a long time ago since I saw ‘Goldfinger’ and I wondered whether I would remember any of it. And surprisingly, I did remember ‘Goldfinger’ and it all went at such a fast pace.

‘Goldfinger’ was released in 1964. It sees Sean Connery as James Bond attempting to thwart the nefarious methods of Gert Fröbe as Auric Goldfinger. In the film, Goldfinger wants to steal a bank full of…well, gold obviously. Can Bond defeat the evil Goldfinger with the help of the sexy Pussy Galore?

Honor Blackman, well known as Cathy Gale in ‘The Avengers’ (the 1960s spy series, not the superhero movie films), stars as Pussy Galore. Seriously, these gorgeous ladies that Bond meets have such weird names. But that doesn’t stop Honor Blackman being cool and spunky in her performance.

The film also stars Shirley Eaton as Jill Masterson, the former girlfriend of Goldfinger’s who gets seduced by Bond and is killed by being painted into gold all over. Now that’s the image that stands out pretty well from this film. The dead girl painted gold on the bed when James Bond discovers her.

The film has plenty of action sequences in it as you would expect involving cars, planes, etc. And it wouldn’t be a James Bond film with Sean Connery having romantic scenes with some ladies. Although, I must admit, this film seems tamer in that approach as opposed to later James Bond films.

Goldfinger also has a villainous henchman in the form of Harold Sakata as Oddjob. Oddjob doesn’t say much as he’s a mute, but he can be pretty lethal especially when Bond causes trouble. He has a trick with his top hat when he uses it as a boomerang to knock off a statue’s head and to kill people.

I have to say that ‘Goldfinger’ is one of my favourite James Bond movies along with other films starring Roger Moore. I’m glad I had this for Christmas and my best mate Stephen knew I would enjoy this movie since I’d seen it already. I’ll need to get into these James Bond movies even more.