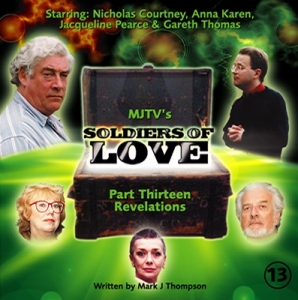 It’s the 10th of April today! Goodness me, we’re going through this month quickly! And today we’re looking at the thirteenth episode of the ‘Soldiers of Love’ series called ‘Revelations’. This ‘Soldiers of Love’ audio episode features Nicholas Courtney, Anna Karen, Jacqueline Pearce and Gareth Thomas.

Last time on ‘Soldiers of Love’, it seems our heroes are getting close to the truth about what’s going on Xoolian Major as they confront the villainous Arran. I found ‘Revelations’ a pretty complex episode, since it ties up a lot of plot points and character journeys featured throughout this 14-part saga.

The heroes featured in this episode include Turnidus, Gamak, Hywel, Frag, Cilla, Yztabub, Synder and Cindy. There’s also Madame Deephole, Major Grondlepuss, Violet Goodgrip and Crispin Caelys. There’s also the return of Jake as well as some surprise characters that have been in the series before.

Here is the link to my review on ‘Revelations’.

Please feel free to comment on my review for ‘Revelations’. You can purchase ‘Revelations’ or the complete ‘Soldiers of Love’ series from the MJTV website.

“By the way there’s no opening title music for ‘Revelations’, which is rather bizarre.” (Pause) “Also I forgot to say that it’s MJTV time.” (Pause) “Could this be a symbolic meaning of something? Hmm.”

Anyway it doesn’t matter. Enjoy my review on ‘Revelations’. See you tomorrow for my review on the final ‘Soldiers of Love’ episode called ‘Blood Ties’.