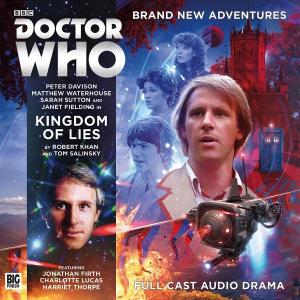 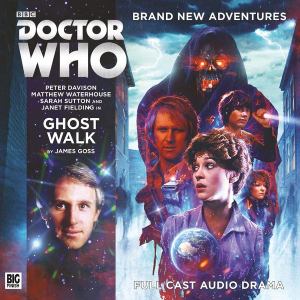 Hey, if you’ve missed my ‘Doctor Who’ reviews on ‘The Star Men’, ‘The Contingency Club’ and ‘Zaltys’ in my mini ‘Nyssa Challenge’ review season last Christmas, you can check them out by clicking on the links here.

As I’m about to go away to Folkestone this weekend to see Sarah Sutton, Peter Davison and Janet Fielding, I’d like to share with you my thoughts on the latest Big Finish audios of ‘Doctor Who’ featuring the Fifth Doctor, Nyssa, Tegan and Adric. I’ve had these audios for my birthday this week!

I’ve enjoyed listening to these audio stories. I’ve been lucky to get them on my birthday. I’ve enjoyed hearing these new adventures with the Fifth Doctor, Nyssa, Tegan and Adric, starring Peter Davison, Sarah Sutton, Janet Fielding and Matthew Waterhouse. They’ve been so entertaining in unique style.

The three stories are ‘Kingdom of Lies’, ‘Ghost Walk’ and ‘Serpent in the Silver Mask’. I’ve wanted to hear these stories for my birthday so I can tell Peter, Sarah and Janet what I thought of them at the ‘Folkestone Film, TV and Comic Con’. I might not say everything, but I can tell them I’ve heard them.

All three stories have been directed by Barnarby Edwards. ‘Kingdom of Lies’ is by Robert Khan and Tom Salinsky, who contribute for the first time for the Fifth Doctor Season 19 team; ‘Ghost Walk’ is by James Goss and ‘Serpent In The Silver Mask’ is by David Llewellyn. These have all been very good.

The guest cast for ‘Kingdom of Lies’ is pretty good. There’s Jonathan Firth (who I’ve seen in BBC’s ‘Middlemarch’ and ‘Victoria & Albert’) as Sebastian, Duke of Cardenas; Charlotte Lucas as Duchess Miranda; Harriet Thorpe (who I’ve seen in ‘The Brittas Empire’) as Amelia and Patsy Kensit as…well, ‘spoilers’. One of the characters’ actors is an anagram of someone else. I was thrilled when I found it.

‘Ghost Walk’ is a pretty creepy story. I enjoyed listening to that one, although I’m not entirely sure I’d consider it a favourite. It’s one of those stories that you will need to listen to again for better clarity of the plot. Maybe my thoughts will change on this story by the time I review it in full detail.

The guest cast is equally good for ‘Ghost Walk’. There’s Fenella Woolgar (who was in ‘The Unicorn and the Wasp’) as Leanne; Sacha Dhawan (who was in ‘An Adventure In Space and Time’) as Matthew; Stephen Greif (who was in the ‘Doctor Who’ story ‘Primeval’) as Sabaoth and there’s also Carolyn Seymour (who’s guest starred in ‘Star Trek: The Next Generation’ episodes) as Mrs. Stubbs.

I did feel there was a lack of Nyssa and Adric by the time we got to the second half of ‘Ghost Walk’. I did like the romantic plot Nyssa had with Matthew the vicar, but it did not end well. I’ve written better love stories with Nyssa than that! I will get into this more when I review ‘Ghost Walk’ later on.

The third story, ‘Serpent In The Silver Mask’ has been enjoyable romp of an adventure where our TARDIS heroes get digging into solving a murder mystery. This story has an atmosphere of an Agatha Christie/Sherlock Holmes style of adventure on a space station. I’ve written ‘The Space Hotel’ too! 😀

Again, another great guest cast for this story. These include Samuel West who plays all of the Mazzini Family –WOW!!! And there’s Phil Cornwell as Superintendent Galgo and Sophie Winkleman as Sofia. It was nice Tegan got a romantic plot too in this story. And it was better than Nyssa’s. Argh!

But the best performances featured in this audio trilogy of ‘Doctor Who’ are of course from Peter Davison, Sarah Sutton, Janet Fielding and Matthew Waterhouse as the Fifth Doctor, Nyssa, Tegan and Adric. I was captivated by their characters throughout all three stories and it was lovely to hear them share such fondness for their characters and enjoying making the stories in the CD interviews.

I’m looking forward to sharing my thoughts on these stories with Peter, Sarah and Janet next time I see them at the ‘Folkestone Film, TV and Comic Con’. I hope to get the CD covers for these stories signed by them too. Can’t wait! Stay tuned for a convention report by me on Folkestone very soon.

Check out my Fifth Doctor stories my blog too if you want to.

I’ll get back to review ‘Kingdom of Lies’, ‘Ghost Walk’ and ‘Serpent In The Silver Mask’ in more detail on my ‘Bradley’s Basement’ blog through ‘The Nyssa Challenge’ soon. Hopefully for Christmas 2018!