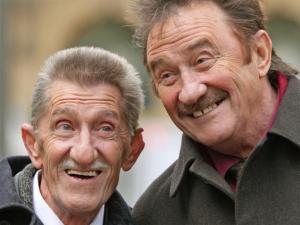 I just want to give a little tribute to Barry Chuckle, one half of the comedy duo called the Chuckle Brothers. I was saddened to hear the news that Barry died recently. I’ve enjoyed him and his brother Paul in ‘ChuckleVision’ and consider them to be one of the finest comedy duos of the modern times.

The Chucklebrothers are like the contemporary Laurel & Hardy with their slapstick humour and one-liners. I always enjoyed watching them whenever I got a chance to see ‘ChuckleVision’ on TV via the CBBC channel. I even had the first season of ‘ChuckleVision’ on DVD one Christmas back in 2011.

I always had a smile on my face and laughed when I saw Paul and Barry doing their antics together, especially with their famous catchphrase of “To you, to me.” I’m hoping that ‘ChuckleVision’ will get repeated on CBBC someday, so that I can enjoy the episodes again and laugh with Paul and Barry. 😀

Paul and Barry Chuckle inspired me with their humour and comedy duo routines that I actually wrote them in my ‘Doctor Who’ fan-fiction story called ‘The Space Hotel’. I had Paul as Larry Cooper and Barry as Bob Hill. I wrote for these characters again in a later tale yet to be released on my blog.

I’m saddened about Barry Chuckle having passed away. This year, Paul and Barry were doing a TV show called ‘Chuckle Time’ on Channel 5. Sadly that has to stop due to Barry Chuckle’s passing. I know how much Barry Chuckle will mean to people especially in working alongside his brother Paul.

Barry Chuckle meant a lot to me as well as his brother Paul. I will always have fond memories of Barry working with his brother Paul in ‘ChuckleVision’. There are tributes given to Barry which you can find in the BBC News post here – https://www.bbc.co.uk/news/entertainment-arts-45074955