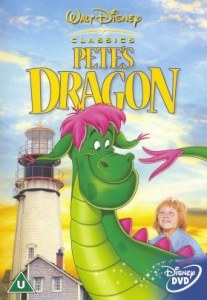 Last year, I did a review on the 1953 Disney movie, ‘Peter Pan’, to commemorate my sister Bethan’s birthday on Tuesday the 19th of September, who passed away a month before she was six years old. This year, I take a look at another of my sister’s favourite Disney movies which is called ‘Pete’s Dragon’.

The 1977 live-action Disney film, ‘Pete’s Dragon’, features a cartoon animated dragon in it. Please feel free to click on the link above to check out; read and comment on my review.

I hope someday that I will get to review the sequel to the 1953 ‘Peter Pan’ Disney film, ‘Return to Never Land’ as well as the films ‘The Little Mermaid’ and ‘Bambi’ which my sister Bethan also liked. Stay tuned for my upcoming review on Steven Speilberg’s film, ‘Hook’, which will be on my blog soon.

In the meantime, enjoy my latest review on the 1977 film, ‘Pete’s Dragon’, from Disney!