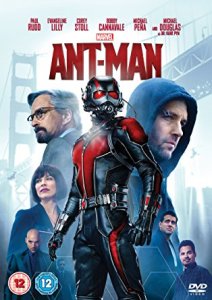 And welcome to the final instalment of the ‘Marvel Cinematic Universe Film Review Season 2’!

Today we take a look at the final film of Phase Two of the ‘Marvel Cinematic Universe’ film series. It’s a bit of a peculiar film to end Phase Two as it’s an origins story for a new superhero character. One wonders why ‘Avengers: Age of Ultron’ was not made as the finale film for Phase Two of the ‘MCU’.

But after seeing this movie, I’m glad ‘Ant-Man’ turned out to the last film of Phase Two. The film stars Paul Rudd as Scott Lang/Ant-Man with Evangeline Lilly; Corey Stoll; Bobby Cannavale; Michael Peña and Michael Douglas. This review by me is also based on my very first viewing experience of the film.

Please feel free to check out, read and comment on my new DVD review for ‘Ant-Man’ here.

Again, this is where we take a break from the ‘Marvel Cinematic Universe’ for now. I’ll be doing some completely different new film review seasons for the next few months. Next time when we return to the ‘Marvel Cinematic Universe’, it will be in 2019 where we take a look at ‘Captain America: Civil War’. Thus Part One of Phase Three of the ‘MCU’ will commence. Stay tuned!