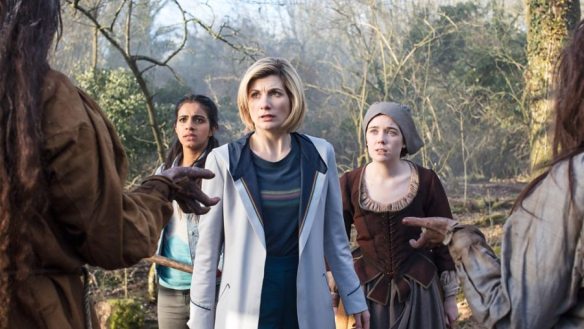 I’ve seen the eighth episode of Series 11 of ‘Doctor Who’ called ‘The Witchfinders’ by Joy Wilkinson. Once again, this has been a top quality drama episode in the latest ‘Doctor Who’ season. I don’t think it’s as good as ‘Kerblam!’, but the tone and atmosphere for this episode felt very believable to watch.

The episode has the Doctor, Graham, Ryan and Yaz visit 17th century Lancashire. They were meant to go the coronation of Queen Elizabeth I, but the TARDIS got sidetracked…as usual. Come to think of it, it’s probably for the best considering the Doctor’s changed appearance for dear Queen Liz One.

(ponders) What was I talking about? (realises) Oh yeah right, ‘The Witchfinders’! But yeah, the TARDIS team find themselves in 17th century Lancashire and they see a witch trial about to take place. A poor woman is about to sentenced to death by drowning as she’s accused for being a witch.

I’m reminded of another ‘Doctor Who’ story called ‘The Witch From The Well’ by Big Finish with Paul McGann’s Doctor. That had someone accused for being a witch; getting persecuted and being sentenced to death. That story was also set in the 17th century. Intriguing to see the same thing in this episode!

I admit I’m not familiar with this particular period of history in 17th century England where women that made miraculous medicines were accused for being witches and they were sentenced to death. But like with ‘Rosa’ and ‘Demons of the Punjab’ beforehand, this historical tale was a welcome one.

I was fascinated by the historical context being portrayed in this episode and how the Doctor, Graham, Ryan and Yaz interacted with the 17th century natives of England in that period. It was rather off-putting seeing people who believed in witches and that Satan was at work in these things.

This episode does have a ‘Horrible Histories’ aspect to it with it being set in 17th century Lancashire. It could’ve easily been played for laughs, but I like how serious the tone of this episode is. It allows for the scariness factor to come into play, especially in the witch trial scenes and some night scenes.

Anyway, the Doctor, Graham, Ryan and Yaz see the Tricia Kelly as Old Mother Twiston, grandmother of Tilly Steele as Willa Twiston being sent down into the river in a chopped down tree at the command of Siobhan Finneran as Becka Savage. It was quite horrific to see that water ducking scene.

The Doctor, despite her insistence to her friends to not interfere with human history, decides to dive into the river and save the life of Old Mother Twiston. Sadly she’s too late as the old woman is dead. Very soon, the Doctor and her friends seek to act out as ‘witchfinders’ to uncover the dark mysteries.

There were times where I wasn’t sure whether he was playing the role for laughs, although I’m not that familiar with King James I as a historical figure. But when I watched scenes where he was up against Jodie Whittaker’s Doctor, the intensity of drama was so spellbinding and incredible to watch.

Jodie Whittaker again has been a joy to watch in this episode as the Doctor. It was amusing when she tried doing ‘apple bobbing’ in an early scene of the episode. Seeing Jodie with an apple in her mouth was very funny. She also gets pretty frustrated when being a woman has its limits in this story.

I was anxious when Jodie’s Doctor got accused for being a witch herself and she was almost about to be sacrificed. But she comes out strong in this episode as she notices certain details about Becka Savage and King James. She’s pretty defiant when she’s so determined to stop the witch killings in this.

She also happens to be a good swimmer. Jodie’s Doctor certainly got her hair wet as well as her clothes when diving into the river and being ducked into the river by Becka Savage. It was exciting when she did confront those alien enemies led by Morax in the episode and how she defeated them.

Bradley Walsh is great as Graham in this episode. I don’t think this has been a standout episode for Graham, but I liked it when he was put in an authority role where he was in charge of the TARDIS ‘witchfinders’ for a bit. Graham’s wry sense of humour comes into play especially for tense moments.

Graham of course isn’t good being an authority figure, despite wearing the big hat he gets. This was illustrated before in ‘The Good Doctor’. I liked it when Graham is veering Becka Savage off from her fiery beliefs in killing assumed witches. I also liked it when he gave the Doctor his hat. 😀

Tosin Cole is very good as Ryan in this episode. He accompanies Graham when the two blokes are meant to veer Becka Savage and King James off from going to hunt out witches in the episode. Like Graham, I don’t think this is a standout episode for Ryan. He too struggles to be the authority figure.

But Ryan somehow forms an interesting connection with King James. Like Graham, Ryan tries to veer the king from his fierce beliefs in witch-killings and Satan. I liked it when Ryan mentioned his mum and nan to the king during the episode. I also liked how brave Ryan was when they defeated the enemy.

Mandip Gill is equally good as Yaz in the episode. Yaz shows concern for Willa Twiston when she loses her grandmother and even follows after her to seek answers and make sure she’s safe. Wait! Yaz went off on her own to follow Willa? Why didn’t Ryan accompany her to see to it that she was safe?

Yaz gets a shock when saving Willa from some strange mud creatures rising up from the ground. I liked it when Yaz, Graham and Ryan had their subplot in solving the mystery of the mud creatures whilst the Doctor was being accused of being a witch. I wished that aspect has been explored further.

The twist of there being aliens inside a hill which is actually a prison and a tree being the lock on the door before it gets chopped down by Becka Savage was pretty interesting to watch in the episode. I also liked the twist where Becka Savage got infected and she transformed into the monstrous Morax.

The concept of the mud witches was pretty disturbing and interesting to watch in the episode. I’ve done a mud monster-like creature called the Mud Man in my ‘Fifth Doctor’ story, ‘Junglos 4198’. So the idea of these mud creatures really appealed to me as I watched this story through and through.

Like I said, there was a lot to take in and I’m not sure I fully grasp the entire historical context that’s included in the episode. I did enjoy the climax in how the Doctor and friends defeated the monstrous mud witches. Willa and King James join the Doctor, Graham, Ryan and Yaz for this last venture too.

However, I did think the climax was a little rushed with so much going on beforehand since the Doctor and her friends needed to defeat the mud witches as quickly as possible. But the saving grace for me was when King James burned Morax for being ‘a witch’ and the Doctor got angry with him.

Another thing is those supposed witches that got burned and became mud monsters in the episode. They all ended dead in the end! They never got resurrected! That’s how you know how things have changed in the series. In Steven Moffat’s day, ‘everybody lives’! But in this, those poor souls stay dead!

I liked it when King James tried to speak to the Doctor about his actions but couldn’t. Still he thanked the Doctor for saving his life. I also liked how the episode ends with King James being amazed at the TARDIS’ dematerialization. There are some intriguing historical resolutions at the end.

I could again be pedantic about how everyone in 17th century Lancashire seems to be accepting of the Doctor, Graham, Ryan and Yaz’s modern-day 21st century dress sense and the way they talk. But honestly it’s a minor issue in the story. Although why didn’t the TARDIS team dress up for that period?

Overall, ‘The Witchfinders’ has been a good piece of solid historical drama in ‘Doctor Who’! I enjoyed the dark tone and atmosphere in this story. It has a bleak quality that’s required for such a dark period of history where women get accused for being witches. I liked how it’s portrayed in this one.

My Dad gave this episode a ‘thumbs up’ when he saw it and I too give it a ‘thumbs up’! At this point, I feel the series has found its footing again in telling coherent dramatic stories led by a superb group of regular cast members including Jodie Whittaker. By the way, Doctor! You faced Satan before, remember?! 😀

Next week’s episode is called ‘It Takes You Away’ by Ed Hime.

4 thoughts on “TV Review – ‘The Witchfinders’ (Doctor Who)”