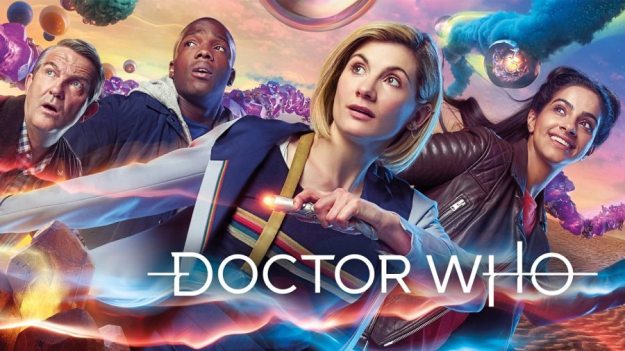 I was originally going to put this in my review for ‘Resolution’, the New Year’s Day Special of ‘Doctor Who’ coming out in January 2019 on TV. But with Series 11 and ‘Resolution’ announced for DVD and Blu-ray releases in January and February, I’ve decided to post my ‘final thoughts’ for Series 11 today.

Anyway, I have found Series 11 of ‘Doctor Who’ to be pretty good! It’s not a perfect season and there are a few issues I have with regards to some of the episodes featured in Series 11. In my opinion, ‘The Tsuranga Conundrum’ is the weakest of the ten episodes from the whole of Series 11.

But overall, this has been a pretty solid season of ‘Doctor Who’ with good storytelling, good characters and good acting throughout. The music by Segun Akinola has been wonderful to listen to and the tone and atmosphere of the season feels refreshing and enjoyable, making it easy to watch.

In many ways, I do feel Series 11 of ‘Doctor Who’ is a direct response to the Steven Moffat era. The series’ tone doesn’t feel silly and pantomime as things were taken more seriously in the season. There are moments of humour but it was very well-balanced with good character drama throughout.

The storytelling provided by Chris Chibnall and his writing team doesn’t feel convoluted. I was able to enjoy the episodes from beginning to end. ‘Kerblam!’ is my absolute favourite and episodes like ‘The Woman Who Fell To Earth’, ‘Rosa’, ‘Demons of the Punjab’ and ‘The Witchfinders’ are good.

I’ve found how easy it was to like the main characters that have come across as heroes for me. Bradley Walsh, Tosin Cole and Mandip Gill excel as proper companions in Graham, Ryan and Yaz, who wanted to be there in the TARDIS. They weren’t very combative and became pretty good friends.

As for Jodie Whittaker, well she won me over in an instant as the Thirteenth Doctor and continued to be even more likeable and reassuring as I watched the series. And, I know you think I’m going to sound crazy here, but Jodie has become one of my favourite Doctors in the entirety of ‘Doctor Who’.

I really mean that! Jodie Whittaker is one of my favourite Doctors alongside Peter Davison and David Tennant. She was exactly who I hoped she’d be in how she played the Doctor. She was funny when she needed to be and she was serious when she needed to be. She is also very warm and energetic.

I know many people will disagree with me on these points, but it’s how I feel and Jodie’s interpretation of the Doctor is the way I would’ve gone with for a female version of the Doctor. I had doubts before Series 11 began again, but I’m glad to say Jodie’s Doctor made me happy indeed.

I’m currently looking forward to ‘Resolution’ next year on New Year’s Day in January 2019 and I’m looking forward to Series 12 in 2020. I know it’ll be a long time to wait for Series 12, but I know how to be patient. I’m glad my faith in the new series of ‘Doctor Who’ has been restored with Jodie’s Doctor.

I’m bound to share these final thoughts again in reviews for Series 11 on DVD or Blu-ray soon. 😀