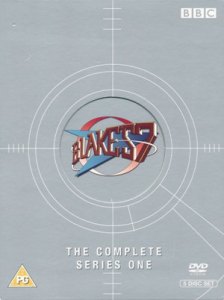 At last! I have seen the sci-fi TV show that many people have talked about but I’d never seen before until now! It’s the cult TV show made in the late 1970s/early 1980s alongside ‘Doctor Who’ – ‘Blake’s 7’! I had Series 1 of ‘Blake’s 7’ on DVD as the surprise Christmas present from my parents!

And I loved watching every minute of Series 1 of ‘Blake’s 7’! I’m surprised I never saw this series earlier in my lifetime! Every one of the 13 episodes of Series 1 has been gripping from start to finish. The writing is brilliant; the actors’ performances are great and the show’s direction is superb!

Even my parents enjoyed the series when we watching Series 1 on DVD over the Christmas period of 2018 right into January 2019. My parents could actually follow the episodes as they were being presented. ‘Blake’s 7’ is definitely a classic BBC sci-fi TV show that is worth checking out these days!

‘Blake’s 7’ was written and created by Terry Nation, who also created the Daleks in ‘Doctor Who’ as well as his other TV show, ‘Survivors’. Terry Nation wrote all 13 episodes of Series 1 of ‘Blake’s 7’. That’s why my parents and I found ‘Blake’s 7’ so good. Terry Nation’s writing always wins in the end!

It would be better to describe ‘Blake’s 7’ as a sort of ‘reversed ‘Star Trek’ according to Terrance Dicks. The series takes place in an alternative future where there’s this corrupt Earth Federation. The main character, Roj Blake, becomes a convicted criminal as he has his mind brainwashed wrongfully.

Very soon, after escaping from a prison ship, Blake and a band of fellow prisoners take an alien spaceship and explore the galaxy. They rename their ship as the Liberator and are soon on the run from the Federation who want Blake’s head. Blake is determined to destroy the corrupt Federation.

The first three episodes of the series (four if you count Cally’s introduction) sets up the ‘Blake’s 7’ series with Blake wrongfully convicted before he and his fellow prisoners take their life aboard the Liberator. The rest of the series are typical standalone episodes which have ‘Star Trek’ feels to them.

The series is produced by David Maloney, who was also a ‘Doctor Who’ director on many episodes in the 1960s and 1970s. There are also many directors on ‘Blake’s 7’ that have directed episodes of ‘Doctor Who’ before as well. They include Michael E. Briant, Pennant Roberts, Douglas Camfield, etc.

The cast of ‘Blake’s 7’ is brilliant. They include Gareth Thomas as Blake; Sally Knyvette as Jenna; Paul Darrow as Avon; Michael Keating as Vila; Jan Chappell as Cally; David Jackson as Gan and Peter Tudenham as the voice of Zen, the Liberator’s computer. These heroes have been amazing to watch!

There are also the two main villains for ‘Blake’s 7’ including Jacqueline Pearce as Servalan, the supreme commander and Stephen Greif as Travis, the space commander. Watching these two villains has been fun. Travis is obsessed with killing Blake and Servalan keeps putting Travis in place.

Gareth Thomas has done some Big Finish audios of ‘Doctor Who’ with Tom Baker; Sylvester McCoy and Paul McGann as well as doing the ‘Dalek Empire’ series; Sally Knyvette was in ‘Spare Parts’ with Peter Davison and Stephen Greif has guest starred in ‘Primeval’ and ‘Ghost Walk’ with Peter Davison. I’ve also heard Gareth Thomas, Michael Keating and Jacqueline Pearce in the ‘Soldiers of Love’ series!

The episodes that I like in Series 1 of ‘Blake’s 7’ include ‘Mission To Destiny’ which has an Agatha Christie styled whodunit murder mystery in it; ‘Duel’ featuring an almost ‘Arena’-like atmosphere compared to ‘Star Trek’ and ‘Project Avalon’ where our heroes rescue one resistance group leader.

I also love the ‘Blake’s 7’ theme music composed by Dudley Simpson. Dudley Simpson composed music for the ‘Doctor Who’ series as well. Seriously, whenever I hear the triumphant, catchy; feel-good theme music about a grim, gritty sci-fi TV show, I just to want to play that over and over again.

Overall, Series 1 of ‘Blake’s 7’ has been a joy to watch. I enjoyed the character relationships in the series, especially when Blake clashes with Avon; the affection there is between Blake and Jenna; the telepathic connection between Blake and Cally; the cowardice from Villa and the gentle giant Gan. 😀

I’m looking forward to what happens next in ‘Blake’s 7’. I’ve purchased Series 2 and 3 already! Stay tuned for my next DVD box set review on ‘Blake’s 7’ – Series 2.