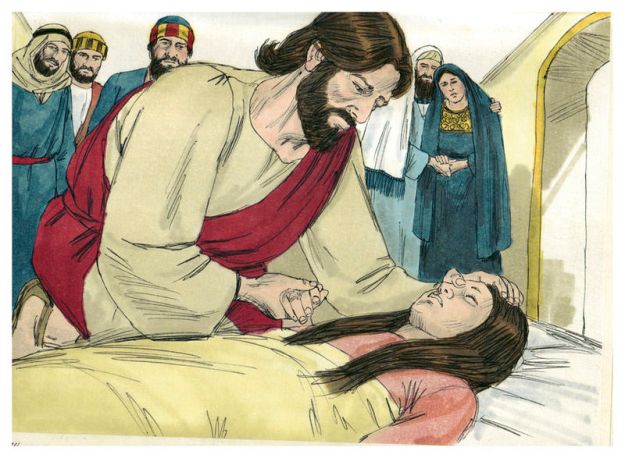 And welcome once again to ‘The Gospel of Mark’!

Check out Chapters 1, 2, 3 and 4 of Mark if you haven’t checked those out yet. This is part of a new segment on my blog where I share my summaries on each chapter in the gospel of Mark in the Holy Bible. Today, we continue the gospel of Mark and the life story of Jesus Christ in Chapter 5 of Mark.

Last time, Jesus told parables about the sower; the growing seed and the mustard seed to his disciples and those who listened to him. It was his way of describing the kingdom of heaven which his disciples didn’t understand. Jesus also calmed the storm when he and disciples were in a boat in a lake.

Let’s find out what Jesus does in Chapter 5 of Mark’s Gospel. Enjoy!

The Gospel of Mark, Chapter 5

Chapter 5 begins after Jesus and his disciple came out of the boat in the lake and entered the region of the Gerasenes. Jesus restores a demon-possessed man who comes out to meet them from the tombs in the area. This man lived in the tombs. No-one could restrain him with the evil spirit in him.

The man also cut himself with stones and he would cry night and day among the tombs and in the hills. The man saw Jesus from a distance and he ran out to him, falling on his knees in front of him. He shouted out loud, demanding what Jesus wanted from him as he also begged not to torture him.

Jesus said for the evil spirit to come out of the man, asking its name. The evil spirit in the man replied, “My name is Legion, for we are many.” The evil spirits begged Jesus not to send them out of the area, demanding to be sent into a large herd of pigs feeding on the nearby hillside. Jesus agreed.

The evil spirits then came out of the man and went into the pigs. There were two thousand pigs in that herd and they rushed down the steep bank into a lake and drowned. The people that tended the pigs went to report this in the town and countryside and many came to see what had happened.

They saw Jesus and they saw the man who had been possessed by the legion of demons. The people were afraid and they began to plead with Jesus to leave their region. Jesus agreed and as he got into the boat with his disciple, the man who had once been demon-possessed begged to accompany him.

Jesus didn’t allow the once demon-possessed man to come with him, as he told him to go home to his people and tell them how much the Lord had done for him and had mercy on him. The man went away and began to tell the people in Decapolis what happened. Everyone was amazed by this news.

After this, Jesus then went and raised a dead girl back to life and healed a sick woman. It happened when Jesus and his disciple again crossed over by boat to the other side of the lake. A large crowd had gathered around him before one of the synagogue leaders named Jairus came over to see Jesus.

Jairus fell at Jesus’ feet and pleased with him to come and heal his little daughter since she was dying. Jesus agreed and went him with Jesus. But as the large crowd followed Jesus following Jairus, a woman was also there and she had been subject to bleeding for twelve years and greatly suffered.

Jesus realised the power had gone out from him and he asked who touched him. His disciples answered that the crowd was pressing around him, but Jesus was insistent. The women then stepped forward and told him the whole truth. Jesus told this woman that her faith had healed her.

He told the woman to go in peace and be free from her suffering. Just then, some people from the house of Jairus came over and told the synagogue leader that her daughter was dead and not to bother Jesus anymore. Jesus overheard this before he told Jairus not to be afraid and to just believe.

Jesus only allowed Peter, James and John the brother of James to come with him when they entered Jairus’ house. Everyone inside the house was crying and wailing loudly. Jesus told these people to stop crying and said that the girl wasn’t dead but asleep. Everyone laughed at him when he said this.

After the commotion of people was sent away, Jesus went to where the little girl was with his three disciples, Jairus and his wife accompanying him. Jesus took the little girl by the hand and said “Talitha koum!” which means “Little girl, I say to you, get up!” At once, the little got up and woke up.

The little girl was twelve years old and everyone was astonished at seeing her wake up and walking around. Jesus gave strict order not to let anyone know about this. He also instructed Jairus and the mother to give their little girl something to eat. This is one of my favourite Bible stories about Jesus.