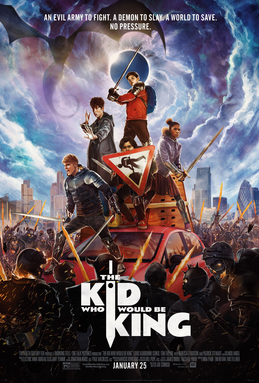 I’ve seen the movie ‘The Kid Who Would Be King’ at the cinema! I really enjoyed this movie! I’d seen the trailers and heard many positive things about it. It looked good in the trailers so I hoped it would be good in the film. Thankfully it was and it felt like a pretty good, traditional, ‘after school’ kids’ movie.

The film focuses upon a young boy named Alexander who lives in London; goes to school and soon finds the legendary sword of Excalibur, belonging to King Arthur. Alex must use the sword to stop the evil ancient enchantress, Morgana, from destroying the world, with his help of his three school friends.

And even if you haven’t, this provides a really good, straight-forward plot explaining the legends of the Sword in the Stone and how Alex seems to be the chosen one when he pulls the sword Excalibur from the stone. The balance of humour and drama in this movie is pretty good and so welcome in this.

The quality of acting is very good in this movie too. There’s Louis Ashbourne Serkis as Alex Elliot in the film. Apparently, Louis is the son of actor Andy Serkis who plays Gollum in ‘The Hobbit’ and ‘The Lord of the Rings’ films. I’m glad I checked him up on Wikipedia and he delivers a brilliant performance here.

There’s also Dean Chaumoo as Bedders, who is Alex’s best friend as well as Tom Taylor as Lance and Rhianna Dorris as Kaye, the two bullies who become Alex’s friends in the film. It was unexpected how Alex becomes friends with these bullies and how they soon become chosen as his knights in the movie.

There are a lot of good messages featured throughout the film, which do get delivered pretty well. These are messages of hope, truth and love which I found very reassuring. It’s also good to see our main characters who are children developing into people attempting to make the world a better place.

The film also features Angus Imrie as Merlin, the wizard who was an ally of King Arthur. I love Angus’ performance in this movie, as he’s able to deliver the comedy and the drama to his performance. You can see how zany he is as well as being serious helping Alex and his friends to defeat the evil Morgana.

Patrick Stewart also stars in this movie as the older Merlin. I was delighted to see Patrick Stewart in this, having seen him in ‘Star Trek: The Next Generation’ as well as the ‘X-Men’ films. It was interesting how Merlin kept shifting from young man as Angus Imrie to old man as Patrick Stewart during the film.

There’s also Rebecca Ferguson as the evil Morgana in the film. I’ve seen Rebecca Ferguson in two ‘Mission: Impossible’ movies including ‘Rogue Nation’ and ‘Fallout’. It took a while for me to recognise her, but in her confrontation with Merlin both as Angus Imrie and Patrick Stewart, she was really good.

The climactic action sequences in the movie were very good, especially when our heroes fought against Morgana’s forces, using the school as a fortress for defence. It was also fun how Alex, Bedders, Lance and Kaye set about their quest to the island of Tintagel to defeat Morgana before it went wrong.

Overall, ‘The Kid Who Would Be King’ was a great movie experience at the cinema and one that I highly recommend. The storytelling is good; the actors are great and the moral messages of the film are delivered very well. If you love knights and sword-fighting, then this is the kids’ movie for you to watch.