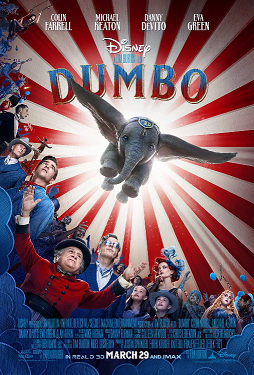 I’m currently away on a little holiday break with my parents in Amroth this April, but here I leave you a little movie review to enjoy! As anticipated, I’ve seen the Disney live-action remake movie of ‘Dumbo’ at the cinema! I wasn’t certain what to make of this film before I went to see it at the cinema.

I saw the 1941 animated film back when I was a kid and loved watching it. But I haven’t seen it for many years. My approach to watching this 2019 film was rather fresh in its viewing. I took this film for what it was. I hoped it would work well with its own identity and the approach by director Tim Burton.

I must admit I was rather dubious about whether Tim Burton’s vision of ‘Dumbo’ would work. In fact, I’m rather surprised he took on the challenge to direct this movie. Tim Burton is more well-known for his craft in the macabre especially in films like ‘Edward Scissorhands’, ‘Beetlejuice’, ‘Corpse Bride’, etc.

My curiosity got the better of me with regards to seeing the 2019 film of ‘Dumbo’ at the cinema. I had discovered mixed reviews beforehand and I heard the film didn’t work well at the box office when it came out. But I was determined to give my thoughts on it and discover myself whether I would like it.

And to be honest…I actually think this live-action version of ‘Dumbo’ is very good! I mean that! I had a good time watching this movie at the cinema. It’s not anything like the classic animated 1941 film no doubt. But I enjoyed its own identity and the fresh approach Tim Burton delivered for it altogether.

The film itself isn’t as a dark and macabre as I expect. There was some dark lighting on occasion, but it didn’t spoil the enjoyment I had from seeing this film. It also feels unrecognisable as a typical Tim Burton film. I found this refreshing since it demonstrates the director can do more than macabre films.

The film’s cast is also good in the film. There’s Colin Farrell as Holt Farrier. Colin Farrell is well-known for his TV stint in ‘Ballykissangel’. He played Bullseye in the 2003 film ‘Daredevil’. I liked him as this circus performer who fought in World War I; lost his arm and has two children and Dumbo to care for.

There’s Danny DeVito as Max Medici, who is the ringmaster and owner of the Medici Brothers’ Circus. Danny DeVito directed and starred in the film ‘Matilda’ and he worked with Tim Burton before, playing the Penguin in ‘Batman Returns’. I enjoyed seeing Danny DeVito on the big screen. That’s a first I think.

And there’s Michael Keaton as V. A. Vandevere, who is a ruthless and enigmatic entrepreneur and amusement park owner of Dreamland. Michael Keaton of course played Batman in both ‘Batman’ and ‘Batman Returns’. He also played the Vulture in the ‘MCU’ movie ‘Spider-Man: Homecoming’ in 2017.

It was interesting to watch this film where Michael Keaton’s the bad guy and Danny DeVito is one of the good guys. In ‘Batman Returns’, it was the other way around. I’m also surprised Tim Burton didn’t cast Johnny Depp and Helen Bonham-Carter in this since he usually casts the two of them for his films.

The film also features Eva Green as Colette Marchant, a French trapeze artist who has an interesting story from being Vandevere’s muse at Dreamland to helping Holt Farrier and his kids with Dumbo and his mother. There’s also Nico Parker as Milly and Finely Hobbins as Joe, who are Holt Farrier’s children.

The film also didn’t have Timmy the mouse (which would’ve been nice to see 😀 ) and the four talking, laughing crows encouraging Dumbo to fly at the end. I didn’t mind this so much since it’s a different take on the story of course and at least they didn’t have the animals talk like they did in the 1941 film.

Overall, the 2019 live-action remake of ‘Dumbo’ has been very good to watch at the cinema. I wasn’t expecting to enjoy this, but I did. It doesn’t match to the 1941 animated film, but I enjoyed Tim Burton’s take on the story. I’m glad my parents and I saw this at the cinema and it was worth watching.

Perhaps I’ll see the live-action remake of ‘Aladdin’ next. 😀