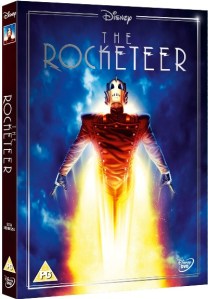 It’s Spring Bank Holiday Monday in May in the UK today! 🙂

I’ve had two birthday presents from my best mate Stephen this year! Surprisingly, not one of them was a Jim Carrey movie. I’m surprised by that as Stephen usually gets me a Jim Carrey movie for my birthday. What’s the matter with him? Perhaps this’ll be made up for later on with ‘Sonic the Hedgehog’. 😀

Anyway, one of these birthday presents was a movie called ‘The Rocketeer’. I enjoyed this film very much. Stephen said it was like a cross between ‘Back to the Future’ and ‘Iron Man’. Interesting description, though it has more of a ‘Raiders of the Lost Ark’ feel to it! Still my parents and I loved it.

‘The Rocketeer’ was made in 1991. It’s a period superhero movie set in Los Angeles in 1938. The film was directed by Joe Johnston, who would go on to direct ‘Captain America: The First Avenger’. I recognise the style of directing as this does feel like an old-fashioned movie with classic 1930s music.

My Dad enjoyed the film as he identified many of the musical cues and numbers from composers like Artie Shaw and Cole Porter. I’m glad this film kept my Dad happy with that kind of music. 😀 The film received positive reviews at the time. However it was a box office failure which is a shame indeed.

Hence why there weren’t any sequels after this. You’d think there would be sequels to ‘The Rocketeer’ especially as there were plans for ‘Rocketeer’ sequels. It saddens me especially when a film like ‘Venom’ is getting a sequel despite receiving negative reviews but was a box office success.

Anyway the film features Billy Campbell as Cliff Secord, a down-on-his-luck pilot who discovers an incredible invention. It’s a top secret rocket pack that allows Cliff to soar through the skies. Soon, Cliff becomes a hero as he adopts the identity of the Rocketeer. But his new identity causes trouble.

I like the 1930s setting and it was exciting to see gangster-like groups trying to acquire the rocket pack from Cliff when he and his friend Alan Arkin as ‘Peevy’ Peabody were testing it out. There are also Nazi Germany elements in the movie, especially when the villain of the film happens to be a spy.

The film also features Jennifer Connelly as Jenny Blake, Cliff’s girlfriend. I’ve seen Jennifer Connelly before in the 2003 film ‘Hulk’. I enjoyed her in this movie. It was nice to see how she turns out as a love interest in wanting to be a Hollywood star and being involved with Timothy Dalton’s character.

And yes! Timothy Dalton is the villain of this movie. He plays Neville Sinclair, a Hollywood actor who later turns out to be a Nazi spy. Timothy Dalton is well-known for playing James Bond in the 007 movies and he later guest starred in the ‘Doctor Who’ story ‘The End of Time’. He’s great in this film.

There was this Frankenstein-like henchman character, Tiny Ron Taylor as Lothar, who I enjoyed watching in the movie. Lothar seemed unstoppable and unbeatable, especially when the Rocketeer had a few fights with him. It was pretty exciting when the Rocketeer and Lothar fought in the climax

The film does contain a lot of zany humourous moments as well as a lot of action-packed stuff with the flying and the fight scenes too. I did find myself making fun of the film a lot as my parents and I watched it, but it was great fun to watch. It was good to see an old-fashioned superhero film as this.

‘The Rocketeer’ comes highly recommended! It is a shame it never got any sequels after this, but it was great fun to watch. I enjoyed the 1930s setting, the direction by Joe Johnston and the performances of the cast including Bill Campbell, Alan Arkin, Jennifer Connelly and Timothy Dalton. 🙂