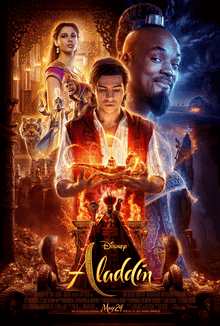 Disney is a very peculiar film-making business, isn’t it? I say that with the highest respect because over the years Disney has produced some very top quality films and TV shows. Whether it’s based on characters created by Disney or from another source, the company often does find its own success.

But lately Disney has been focusing on making a stream of live-action and CGI animated films to be released for cinema. It wasn’t always like this though. Disney had success in 2-D animated cartoon films in the days of Walt Disney himself and them days of the Disney Renaissance from 1989 to 1999.

I don’t know what the reasoning is behind Disney trying to do more live-action films as well as CGI animated films and disturbing films that weren’t initially owned by Disney such as ‘Star Wars’ and the ‘Marvel Cinematic Universe’. But somehow they gain success and they do make a lot of money.

Audiences can be pretty divided over the live-action versions of Disney films that were originally made in cartoon form. I can appreciate that considering they grew up with that cartoon film as a kid and they feel a sense of loyalty to what they grew up with as opposed to what’s made in live-action.

I know that’s something that not everyone will agree with. But as a casual viewer and as a reviewer on many things such as TV and film, I’d like to keep an open mind. I’d like to see if a certain film or TV product that’s a remake will be an improvement on something that was originally made long ago.

And here’s where we get to the point of what I’m saying here. This summer for 2019, I’m going to be watching three Disney movies at the cinema. It’ll be one in May which is ‘Aladdin’, one in June which is ‘Toy Story 4’ and one in July which is ‘The Lion King’. This summer Disney film trilogy feels exciting.

So let’s begin by talking about a 2019 live-action version of a film that was originally made as a 2-D animated movie in 1992 – ‘Aladdin’. I saw the 1992 version of ‘Aladdin’ as a kid when my parents and I had the film on a VHS. I recall enjoying ‘Aladdin’ as a kid as well as some other follow-ups to it.

Looking back on the 1992 ‘Aladdin’ film, I do recall certain aspects of the movie that were pretty cartoony and zany especially with Robin Williams’ Genie. So when it came to the 2019 live-action remake, I hoped the new film will be an improvement on what I had seen before in the 1992 version.

And after seeing the movie at the cinema (and I know not a lot of people will like me saying this) but I actually enjoyed the 2019 film version of ‘Aladdin’. Yes there are things that I questioned about it in terms of the changes of the story structure. But I did find this to be a very good live-action version.

For those of you who don’t know the story, ‘Aladdin’ is about the titular street urchin who finds a magic lamp inside a cave of wonders. He uses it and summons a Genie who grants him wishes to win the heart of Princess Jasmine of Agrabah. But Aladdin finds his opposition in the evil villainous Jafar.

The live-action version of ‘Aladdin’ is directed by Guy Ritchie, who directed the two ‘Sherlock Holmes’ movies starring Robert Downey Jr. The film stars Mena Massoud as Aladdin, Naomi Scott as Princess Jasmin, Marwan Kenzari as Jafar, Navid Negahban as the Sultan and Will Smith as Genie! 😀

Nowadays, I mean. Maybe I didn’t mind it as a kid, but looking back and seeing clips of Robin Williams’ Genie for research, I find him in the animated version to be over-the-top and way cartoony. Maybe that was the point, but it just doesn’t work for me nowadays compared to watching it in live-action.

I also found Will Smith to be in a more active role as the Genie in helping Aladdin to gain his wish to become a prince and win Princess Jasmine’s heart compared to the cartoon version. It was also very nice to see Will Smith’s Genie falling in love with Nasim Pedrad as Dalia, Jasmine’s handmaiden.

As for Mena Massoud as Aladdin, I found him very good in this live-action film too. I know Aladdin was confident in the animated version and some may prefer that. But I liked it when Aladdin was out-of-depth in meeting Genie and trying to be the prince which feels very believable in live-action.

Before seeing the film, I became aware of criticism laid on Marwan Kenzari’s villainous performance as Jafar. But honestly, after seeing the movie, I didn’t see anything wrong with his performance. I thought he was intimidating, especially when he gained the powers he wanted with using that lamp.

The film also features Abu, Aladdin’s pet monkey who I was glad to see in this. I couldn’t help think of ‘Monkey Trouble’ when seeing Abu in the live-action film. 😀 There’s also Iago, Jafar’s pet parrot in the film. Thankfully I found Iago less annoying in the live-action film compared to the animated films.

The music soundtrack for Aladdin is excellent. Before seeing the film, I enjoyed listening to the new versions of the songs featured in the 1992 animated film. They mostly match to what’s in the original film. The songs and music were originally composed by Alan Menken, Howard Ashman and Tim Rice.

I also enjoyed hearing Mena Massoud and Naomi Scott singing ‘A Whole New World’ together, matching to how it was sung in the original film. There is a new song featured in the 2019 live-action remake called ‘Speechless’ sung by Naomi Scott. It was written by Benj Pasek and Justin Paul for the film.

Overall, the live-action version of ‘Aladdin’ has been worth seeing for me. I know many won’t regard it highly like I do, but I consider it superior to the cartoon version which I felt was over-the-top in many places. There are plot structural changes, but the cast; the songs and the music are very good.