It’s with great sadness that I’ve discovered Terrance Dicks has recently passed away. The news has affected me deeply. I’ve had the pleasure of seeing and meeting Terrance at two ‘Doctor Who’ conventions. He has made an awesome contribution to the ‘Doctor Who’ series and he’ll be missed!

Terrance Dicks was the script editor for ‘Doctor Who’ on TV from 1968 to 1974 during the Jon Pertwee era. He has also written a number of ‘Doctor Who’ stories as well as being script-editor including the 10-part epic ‘The War Games’ with Malcolm Hulke that closed Patrick Troughton’s era.

He also wrote the first ‘Doctor Who’ story with Tom Baker’s Doctor called ‘Robot’ and wrote stories like ‘The Brain of Morbius’ (under the pseudonym ‘Robin Bland’ 😀 ); ‘Horror of Fang Rock’, ‘State of Decay’ and the superb 20th anniversary special story ‘The Five Doctors’. His contribution is immense! 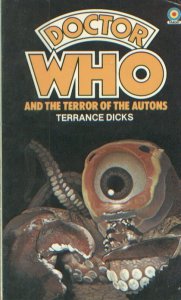 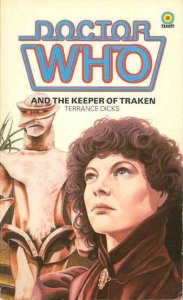 As well as writing for the TV series, Terrance Dicks has also written plenty of Target novelizations of ‘Doctor Who’. I’ve read Target novelizations by Terrance (some with audiobooks) including ones for ‘Terror of the Autons’, ‘The Time Warrior’, ‘The Horns of Nimon’, ‘The Keeper of Traken’ and more. 🙂

Terrance also wrote many ‘Doctor Who’ books for the Virgin and BBC Books range during the Wilderness Years from 1989 to 2005. He wrote ‘Blood Harvest’ and ‘Shakedown’ for Virgin as well as ‘Players’ (which I’ve read recently) for BBC Books. Terrance’s style of ‘Doctor Who’ writing is superb.

As well as writing ‘Doctor Who’, Terrance has also written and produced many works that are non-‘Doctor Who’ related. I’ve seen the 1985 BBC production of ‘Oliver Twist’ produced by Terrance Dicks and he and Barry Letts worked together on many TV period drama serials like ‘The Pickwick Papers’.

Like I said, I’ve met Terrance at two conventions. The first time I saw him was at the ‘Valiant 2015’ convention in Sheffield, March 2015. I got to ask him a question during his panel talk about what his thoughts were on ‘The Day of the Doctor’ anniversary special and I enjoyed the answer he gave.

The second time I saw Terrance was when he made a surprise appearance at ‘The Capitol II’ convention in May 2017 during Jon Culshaw’s panel talk. I got to meet Terrance during a signing session. He signed an autograph for me as I thanked him for writing the ‘Doctor Who’ stories he did.

The latest news of Terrance’s passing has affected a great deal of many people who knew him in the ‘Doctor Who’ community. He has been very inspirational for many ‘Doctor Who’ writers who went on to work in the TV series itself as well as in the book and audio industry. He’s left an impressive mark!

I’ve been inspired by Terrance’s writing both in TV and in books. From reading/hearing the books he’s written in ‘Doctor Who’, I’ve taken inspiration from his writing with writing my own ‘Doctor Who’ stories in my ‘Fifth Doctor’ series and ‘Short Trips’. I’ll always be grateful for his genius talent!

I’m currently revisiting Season 10 of ‘Doctor Who’ with Jon Pertwee on Blu-ray which was script-edited by Terrance Dicks as well as produced by Barry Letts. It’s very sad Terrance is gone and I will remember him fondly as I continue to watch the rest of Season 10 and watch interviews with him.

As I’ve read ‘Players’ by Terrance Dicks recently, I gained a sense of enjoyment out of reading his work. Terrance knows how to write for ‘Doctor Who’ in any incarnation. He ensured its longevity especially when working as the script-editor and his contribution and legacy will never be forgotten.

Here are the tributes made to Terrance Dicks via BBC News and Big Finish.

My prayers and thoughts go out to the family and friends of Terrance Dicks.

Thanks for reading everyone.