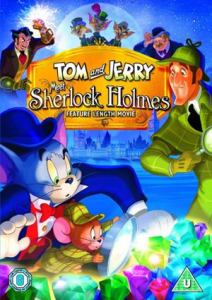 So it makes sense for me to do another cartoon film featuring an unusual crossover! 😀 This time it’s ‘Tom and Jerry Meet Sherlock Holmes’. I purchased this DVD along with some other ‘Tom and Jerry’ DVDs in a box set. I’ve got plenty more ‘Tom and Jerry’ zaniness to occupy my time with from here. 😀

For now though, let’s talk about ‘Tom and Jerry Meet Sherlock Holmes’. This direct-to-DVD film was released in 2010. It has the famous cat and mouse duo meeting the greatest detective from literary author Sir Arthur Conan Doyle. I wondered how this team-up would work and what antics were in store for us.

Surprisingly, after my parents and I saw it, we found it really good. It was a lot of fun and managed to blend the ‘Tom and Jerry’ atmosphere into a Sherlock Holmes environment nicely. The film was apparently scripted by Earl Kress. He has done plenty of cartoon shorts and feature films in the past.

The film has Sherlock Holmes and Dr. Watson with Tom and Jerry helping them to solve a mystery. A crook steals jewels in the London area and a beautiful singer named Red gets framed for the thefts. Tom and Jerry help the detectives to track down the true thief by following clues during their antics.

What’s surreal is that Jerry is already established in Sherlock Holmes’ home as his pet when he gets sent out to collect a copy of the Times. This is before Tom comes along to look for Holmes when singer Red requests his help. I’m surprised Basil the Great Mouse Detective wasn’t invited on this. 😀

The voice cast is also surprisingly very talented. For Sherlock Holmes, he’s voiced by Michael York (who I’ve seen in the TV miniseries ‘Jesus of Nazareth’). Dr. Watson is voiced by John Rhys-Davies who I’ve met in real life and know him for playing Gimil in ‘The Lord of the Rings’ film trilogy! Wow!

Professor Moriarty appears in this film too and he’s voiced by Malcolm McDowell, who I’ve seen in ‘Star Trek: Generations’. It’s amazing how the voice cast for this ‘Tom and Jerry’ film is led by three well-established actors. I don’t think I’ve ever come across a ‘Tom and Jerry’ film in that vein before.

The film also features Tuffy the mouse, who happens to be Jerry’s brother and is the vicar at St. Paul’s Cathedral. Do I need to question that? Although how come Tuffy wasn’t Jerry’s brother in the ‘Willy Wonka’ and ‘Oz’ films I’ve seen. Was that forgotten about when Tuffy appeared in those films?

There’s also Butch and Droopy, who have become two ‘police-dogs’. Yeah because…dogs get jobs in the Sherlock Holmes world now! 😀 It was amusing how Butch tried to win the reward to catch the criminals, yet Droopy did a better job being a ‘police-dog’ than Butch did. Droopy’s cheerful as ever!

Spike and Tyke also appear in this film. I don’t think I’ve seen Tyke in a ‘Tom and Jerry’ film with his dad Spike lately. It was amusing when Spike taught Tyke how to be a good dog guard the Punjab Embassy, yet they fail miserably when the Star of Punjab gets stolen. Tyke noticed it but not Spike. 😀

The film’s climax was pretty dramatic and zany, especially when our heroes were tackling the true villain (I’m sure you know who it is) and his accomplices…who are talking cats…yes of course!…during a horse and carriage chase. It got tense in whether our heroes were going to win. 😀

I’m looking forward to seeing more ‘Tom and Jerry’ DVDs in the future. I’ve got quite a number lined up in my list. The next two DVDs should be Christmas ones. I wonder what those DVDs be like! 🙂