He’s dark and mysterious! But is he a person you really want to trust in real life? 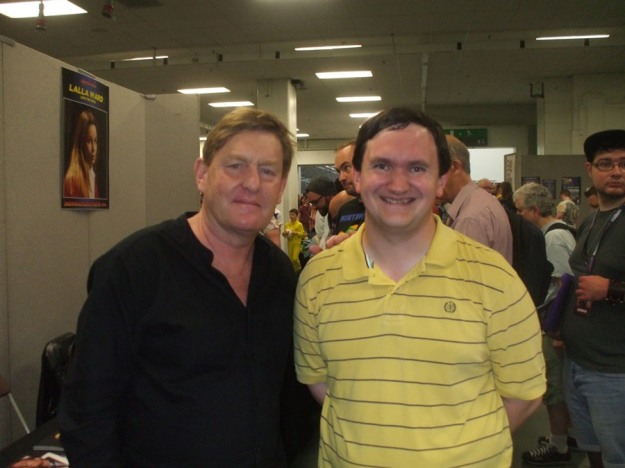 Of course he is! Mark Strickson is a great guy! I’m glad to have met him at conventions over the years! Mark Strickson is well-known for playing Vislor Turlough, Peter Davison’s Doctor’s companion in the ‘Doctor Who’ TV series and the Big Finish audios. I’ve enjoyed Mark as Turlough in his TV and audio stories. 🙂

The first time I met Mark was at the ‘Time Warp’ convention in Weston-super-Mare, July 2014. I’ve seen Mark at more conventions since then including the ‘Dimensions 2015’ convention in Newcastle, October 2015; the ‘Fantom Events at Memorabilia’ event in Birmingham, March 2016 and the ‘London Film & Comic Con’ in July 2017. All the times that I’ve seen Mark have pleasant, enjoyable ones.

I’ve enjoyed chatting to Mark at conventions and sharing how much I’ve enjoyed him as Turlough in the TV stories and the Big Finish audios he’s done. Mark has done some Big Finish audio adventures with Peter Davison, Janet Davison and Sarah Sutton. He has also read Short Trips audios with Turlough.

I’m pleased I’ve met Mark at conventions. I’ve even had a photo with him, Sarah Sutton, Daphne Ashbrook and Maureen O’Brien at the ‘Dimensions 2015’ convention. I’m happy that his character Turlough has had development in the Big Finish audios compared to the lack of it during the TV series.