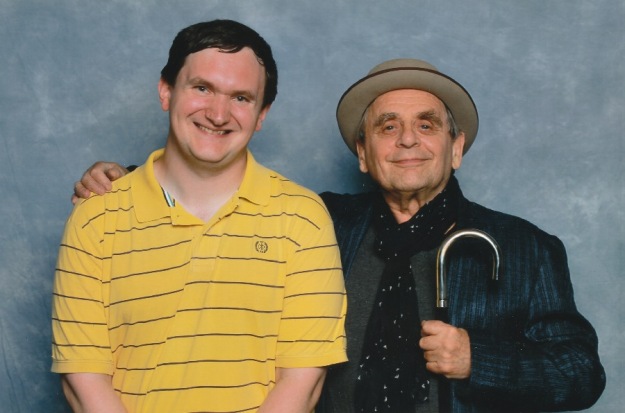 It’s time to talk about Sylvester McCoy, the Seventh Doctor in ‘Doctor Who’! I first met Sylvester at the ‘London Film & Comic Con’ in July 2011. I was in awe of him when I first met him and still am whenever I see him at conventions. I’m glad I’ve shared with him how much I’ve enjoyed him in ‘Doctor Who’.

I first saw him and Sophie Aldred do a panel talk together at the ‘London Film & Comic Con’ in 2011. I recall Sylvester sharing that he was playing Radagast the Brown in the upcoming ‘Hobbit’ movie trilogy. It would be one year later that I would see Sylvester as Radagast in the first ‘Hobbit’ movie. 😀

Sylvester has signed a number of items for me at conventions over the years. This includes my DVD covers for ‘Delta and the Bannermen’, ‘Remembrance of the Daleks’ and ‘Survival’ as well as my CD covers for ‘1963: The Assassination Games’, ‘Love and War’, ‘Forty-Five’, ‘The Four Doctors’ and ‘Cold Fusion’. Sylvester has also signed my copy of the original ‘Cold Fusion’ book; my copy of ‘Novel Adaptations, Volume 2’ by Big Finish featuring ‘Damaged Goods’; my copy of ‘The Light At The End’ and my DVD cover of ‘The Airzone Solution’. I’m very pleased that Sylvester signed these items for me.

I’m happy to have heard Sylvester McCoy’s Doctor in many of the Big Finish audios compared to the short tenure he had in the TV series. I was happy to see Sylvester star alongside Peter Davison and Colin Baker in ‘The Five(ish) Doctors Reboot’ for ‘Doctor Who’s 50th anniversary in 2013. I’m also very happy to have met Sylvester at conventions as I’ve enjoyed chatting to him and hearing his anecdotes on panels.