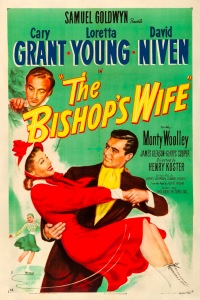 My parents and I were planning to see a limited re-release of ‘White Christmas’ at our local cinema this week. Sadly we weren’t able to, but thankfully we’ve seen another Christmas film to make up for it. And it’s a Christmas film I’ve never seen before! This is ‘The Bishop’s Wife’, starring Cary Grant!

We know ‘It’s a Wonderful Life’ – a film about a man who loses his way in life and gets visited by an angel to help him. Well, ‘The Bishop’s Wife’ has a similar approach with superficial elements, except done differently. I found how easily quaint and charming this black-and-white Christmas film from 1947 was.

My parents and I saw this Christmas movie on the big screen at Showcase Cinemas in Nantgarw. We didn’t know what to expect when we saw this film. I was surprised my parents hadn’t seen this film before. They easily enjoyed it as well as me. The film also features big names from the days of 1947.

As well as Cary Grant, there’s Loretta Young and David Niven. I’ve seen Cary Grant in a number of films such as ‘Arsenic and Old Lace’, ‘To Catch a Thief’ and recently in ‘North By Northwest’. The character Cary Grant plays in this particular Christmas film is different to other film roles he’s played.

I was expecting Cary Grant to be playing the actual bishop in the film. But it turns out it was David Niven who was playing the bishop. Cary Grant instead plays an angel who helps a bishop with his problems. Cary Grant as an angel! That’s so surreal to think about. Yet he plays it so remarkably well.

David Niven as the bishop named Henry Brougham struggles to secure money for a cathedral he’s trying to maintain. Cary Grant as the angel named Dudley comes at Henry’s prayer to God in order to give him guidance and to see what he’s missing during Christmas time such as his wife and daughter.

Loretta Young plays Julia Brougham, Bishop Henry’s wife, who is unhappy about her husband’s unhappiness in saving the cathedral. Dudley comes along to bring happiness into Julia’s life such as having lunch at a restaurant; ice-skating and buying a new hat, very much to the dismay and jealously of Bishop Henry.

But Dudley’s actions to help Julia be happy are quite innocent when he’s guiding Bishop Henry to see what he can’t see beyond the struggles he has. Dudley performs little miracles that nobody anticipates such as decorating the Christmas tree and typing a Christmas Eve sermon for the bishop.

The film does contain quite a number of humorous moments. I found how easy it was to laugh at certain moments in the film whenever Dudley performed miracles. The moment where Dudley walks out of Bishop Henry’s office when he had the door locked was amusing and quite awe-inspiring here.

Dudley also helps people who are in need of help and has some influence to make people see the good side of things. That scene where he helps a blind man to cross the road early on and when he persuades Gladys Cooper as Mrs. Hamilton to contribute funds for Henry’s cathedral were quite good.

There were some familiar faces in the film that my parents and I saw when watching the film. There were a number of child actors we recognised from ‘It’s a Wonderful Life’ such as the boy who played young George Bailey – Robert J. Anderson – and Karolyn Grimes as Debby, the Broughams’ daughter.

The film also featured Monty Wolley as Professor Wutheridge, James Gleason as Sylvester the taxi driver, Elsa Lanchester as Matilda the housekeeper and Sara Haden as Mildred the secretary. A lot of these characters become affected by Dudley’s presence when he brings joy and happiness to them.

Just to say, David Niven has appeared in many films such as ‘The Pink Panther’ films as well as ‘The Prisoner of Zenda’, which I’ve yet to see. Like Cary Grant, he was a big name in his day. This was the first time I’d seen David Niven in anything proper, especially on the big screen which was a huge joy.

I enjoyed ‘The Bishop’s Wife’ very much on the big screen and I’m glad I recommended it to my parents. It’s a nice Christmas film that’s a romantic comedy with some very good Christian messages in it. Cary Grant is pretty good as angel Dudley and I like how reassuring it is by the film’s conclusion.

Just as my parents and I were leaving, we met a couple who said they enjoyed the film very much.