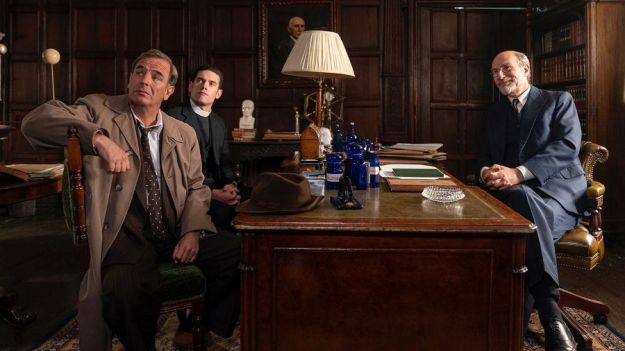 I enjoyed Series 5, Episode 4 of ‘Grantchester’ yesterday on ITV1. I did find it better than the previous episode of the series and that’s probably due to me getting clarity on where the character journeys were going. Also, the murder mystery reveal for this episode took me totally by surprise. 😀

In the episode, a young student runs about stark-naked in the streets. When I saw that, I was like WHOA, WHAT?!! The young man bumps into Geordie and Will on the way and shouts out loud about ‘aliens invading’. Geordie’s about to stop the young man and arrest him but Will stops him doing so.

Um…I would’ve stopped him. I mean, he was running around starkers. I’m pretty sure that would’ve been frowned upon greatly in the 1950s. Anyway, the young man’s found dead out on the Fens. Pretty soon, Will and Geordie investigate and discover the death’s connected to a Cambridge research project.

The project involves experimenting with mind-altering drugs, specifically LSD. Not that I’m an expert on drugs, but I can imagine LSD being pretty harmful, especially when the young man took an overdose of it. So many things connect to his death, including his student friends; tutors and parents.

I was pretty surprised by the reveal of who committed the murder of the young man in the episode. For a while in the fourth act, I thought it was going to turn out to be no-one and that the young student committed suicide. Eventually, Will works it out and confronts the person who did the deed.

Regarding other character developments going on in the episode, Will continues to have a rocky relationship with his romantic interest Lauren Carse as Ellie Harding. Will regrets his actions in the previous episode, but he still likes Ellie a lot. He goes too far when he proposes marriage to her. Too fast!

Elsewhere, Kacey Ainsworth as Cathy Keating continues to have problems with his mum Paul Wilcox as Diana, who seems to have a mental illness in the episode. It was interesting to hear the backstory revealed about Cathy and her mum to Geordie. Soon, Geordie sees Cathy’s mum get taken to hospital.

There’s also the issue of Tessa Peake-Jones as Mrs. Chapman who is currently unhappy in her marriage to her husband. I liked Al Weaver as Leonard showing concern for Mrs. C when she’s unable to be positive in life. Mrs. C breaks down into tears with Leonard embracing her in the story.

It seems that we’re going to meet Leonard’s father in the series when he decides to invite him to Grantchester. I don’t know how the issue of Cathy’s mum in hospital is going to be resolved as well as the issues of Will’s relationship with Ellie and Mrs. Chapman’s marriage predicament to her hubby.

Tom Brittney and Robson Green stand out pretty well in the ‘Grantchester’ series so far. I’ve enjoyed their interaction together in terms of solving murder cases. It does seem different compared to the Geordie and Sidney relationship in the first three seasons I believe, but it seems well-settled here. 🙂

With hope, my review on Series 5, Episode 5 of ‘Grantchester’ will be up on my blog next week.