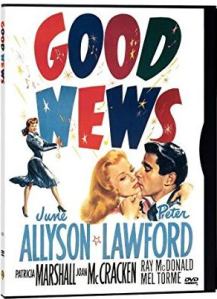 I’ve reviewed the 1947 film ‘Good News’, starring June Allyson and Peter Lawford. This is a musical romantic comedy film about a campus football hero who falls in love with a part-time librarian. The film is based on the 1927 stage play of the same name and is the second film adaptation to be made.

The first film adaptation of ‘Good News’ was made in 1930, though that had sexual innuendo in it. Ooh! 😀 As well as June Allyson and Peter Lawford, the film also stars Patricia Marshall, Joan McCracken, Ray McDonald and Mel Tormé. Did I find this a dated musical comedy film of 1947 or not?

Please feel free to check out, read and comment on my review for ‘Good News’ by clicking on the link for it.