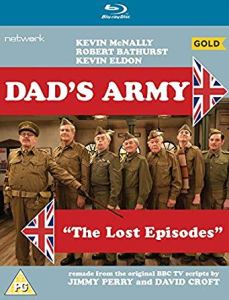 I’ve seen and reviewed ‘Dad’s Army: The Lost Episodes’ on DVD/Blu-ray! These are 2019 recreations of three missing episodes from Series 2 of the ‘Dad’s Army’ TV series including ‘The Loneliness of the Long Distance Walker’, ‘A Stripe For Frazer’ and ‘Under Fire’. They’re recreations based on the original scripts by Jimmy Perry and David Croft and feature a new cast playing the ‘Dad’s Army’ characters.

Please feel free to check out, read and comment on my reviews for the three 2019 recreated ‘Dad’s Army’ lost episodes including ‘The Loneliness of the Long Distance Walker’, ‘A Stripe For Frazer’ and ‘Under Fire’ by clicking on the links for them. As well as reviews on the 2019 remake episodes, there’s also reviews on the radio episodes and the 2015 animation episode of ‘A Stripe For Frazer’ based on the TV soundtrack of the original 1969 episode.