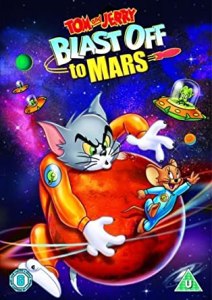 Whilst many of us (including myself) are staying cooped at home because of the coronavirus pandemic – please keep safe – my parents and I have found time to enjoy watching movies on DVD/Blu-ray at home. One of these movies is our latest ‘Tom and Jerry’ film – ‘Blast Off to Mars’!!! 🙂

I had fun watching ‘Tom and Jerry: Blast Off to Mars’ recently! It’s another zany film with our loveable cartoon duo Tom and Jerry. This time, they go into outer space and visit Mars, meeting Martians along the way. With me into sci-fi stuff like ‘Doctor Who’ and ‘Star Trek’, I was for this one!

‘Blast Off to Mars’ is how you’d expect it to be. It has Tom chasing after Jerry around a house somewhere before getting to a ‘space place’ (No, that’s what it’s called in the film) until they shoot off into a rocket and end up on Mars. They soon cause a Martian invasion of Earth. Well, obviously!!!

There’s a lot of fun to be found in ‘Blast Off to Mars’. I know that the ‘Tom and Jerry’ formula might get repetitive in movies like this, but it’s a good way to relax your mind and enjoy the fun. There are lots of cartoon antics to be found when Tom tries to get one over Jerry. He fails miserably in the end.

In terms of other characters as well as Tom and Jerry, well…there are the Martians of course. And they’re literally little green men. Not like the LGMs from ‘Toy Story’ and certainly not like Ice Warriors from ‘Doctor Who’. I suppose everybody has their own interpretation of Martians, right? 😀

There’s the lead female Martian called Peep, who develops a bit of flirtation with Jerry. Jerry gets mistaken for being ‘the Great Gloop’ by the Martians. Very soon, Tom attacks the Martian City on Mars, trying to find Jerry. It causes the Martian City to be destroyed and leads to the Earth invasion.

Early on in the film, Tom and Jerry cause a lot of havoc and destruction before they venture off into space. This includes ruining Spike’s ‘bone lunch’ (yeah Spike’s in this film too, but not Droopy surprisingly) as well as hedges at the ‘space place’s garden, causing the gardeners to get really angry.

I’ve been watching these ‘Tom and Jerry’ films out of order apparently. ‘The Magic Ring’ should’ve been first; then ‘Blast Off to Mars’ and then ‘The Fast and the Furry’. I blame the DVD box set that these movies came in when I bought them. 😀 Ah well, I look forward to ‘Shiver Me Whiskers’ next.

As well as Martians in flying saucers invading the Earth, there’s also a giant red robot with a hoover that…hoovers people up. This was funny to see in the movie. Spike gets really angry when he climbs up the giant red robot to get his bone back. Spike is soon controlling the robot at the end. Peculiar! 🙂

One thing to mention about this movie is that when the two astronauts Buzz and Biff visited Mars, they left their food supplies with Tom and Jerry once they’d been stranded. Bit careless, wasn’t it? To leave food supplies behind on Mars. Though hydrating foods like pizza and cheese burgers are good!

That put me in mind of ‘Back to the Future, Part II’. 😀 Anyway, ‘Tom and Jerry: Blast Off to Mars’ has been a fun ride of a cartoon film to watch. It was a nice relaxing film to watch. You can’t do no wrong with watching Tom and Jerry here and in an outer-space adventure like this, it makes even better. 🙂

By the way, the US President is like Arnold Schwarzenegger in the movie! 😀