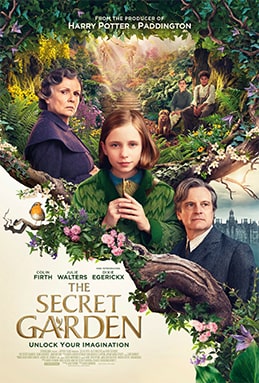 After doing my movie trailer review for ‘Wonder Woman 1984’, it’s time to take a look at another movie trailer for an upcoming British drama film for kids. This film was meant to be released at Easter in April 2020, but sadly it’s been rescheduled due to the coronavirus pandemic – please keep safe. Hopefully when cinemas reopen again, there’ll be a chance to see this movie on the big screen.

In the meantime, let’s take a look at the trailer for the latest film adaptation of…‘The Secret Garden’!

Now this movie caught my interest when I saw the trailer for it at the cinema earlier this year. In that, I was interested because I wondered “Wait! Hadn’t a movie adaptation of this children’s story been done already?” This is another situation like ‘Little Women’ where this film needed an update.

‘The Secret Garden’ was originally a 1911 novel by Frances Hodgson Burnett. As you saw from the 2020 film trailer, it tells the story about a young orphan girl named Mary Lennox who gets sent to live with her uncle in an isolated Yorkshire estate. Soon, she finds this secret garden with her friends.

Over the years, there have been quite a number of film and TV adaptations of ‘The Secret Garden’. The one I’m most familiar with is the 1993 film adaptation. It’s interesting that a new film adaptation of the story should be made and by the same producers of the ‘Harry Potter’ and ‘Paddington’ films.

From the trailer, the film does look interesting. The Secret Garden itself looks amazing in its colours and visual representation. The story and the character seem just as I remember them from watching the 1993 film adaptation. Not sure how things will be different once it comes to seeing the new film.

Interesting that Dickon is being played by a black actor in the 2020 film since it was a white actor in the 1993 film. I’m not sure about the moment where Mary and Dickon spit their hands before shaking on a deal to keep a secret. It doesn’t send a good message to children especially in today’s climate. 😀

Overall, I’m looking forward to seeing ‘The Secret Garden’ 2020 film when it gets released. I’m sure it’ll be a heart-warming film for kids and adults when they go to see it. It’ll be intriguing to compare and contrast from what I’ve seen in the 1993 film to the 2020 film. Let’s hope it’ll be worth watching!