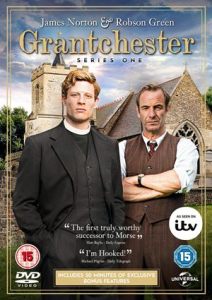 We’re back with another episode from Series 1 of ‘Grantchester’. Series 1, Episode 5 was engaging to watch and it was interesting to see how James Norton as Sidney Chambers isn’t the clear-cut vicar character he’s made out to be, even when he’s a detective. He can have his flaws and not be perfect.

In the episode, Sidney takes Robson Green as Geordie to a jazz club in London where they’re guests of Sidney’s sister, Fiona Button as Jennifer and her boyfriend Ukweli Roach as Johnny Johnson. They were in the show’s second episode. This episode also features Peter Egan as Archie, Johnny’s father.

It was a delight to see Peter Egan in this ‘Grantchester’ episode as I know him for playing Paul Ryman in the BBC comedy series ‘Ever Decreasing Circles’. Peter has also appeared in some Big Finish audios of ‘Doctor Who’ including ‘Protect and Survive’ and the first ‘Dark Eyes’ box set with Paul McGann. 🙂

It was nice to see the jazz club scenes, especially where Sidney and Geordie are enjoying themselves – though Geordie does get a bit too drunk that evening. 😀 Morven Christie as Amanda also joins the two gents that evening. Things get complicated as Sidney and Amanda become closer to each other.

Halfway through the evening, Johnny’s sister – Natasha Cottrial as Claudette, gets murdered. It turns out she was about to elope with her lover Nakay Kpaka as Walter Stirling, who accuses Archie since he’s an arrogant man. Archie brings in Nicholas Sidi as DCI Williams whilst Geordie suspects he’s corrupt.

There is this sense of racial prejudice going on, concerning Claudette about to elope with her lover Walter since he’s ‘coloured’. Mind you, not meaning to sound racist, I was confused about that since Claudette and Johnny aren’t exactly white. I don’t know if Archie adopted Johnny and Claudette. 😐

Whilst Sidney and Geordie investigate the murder, Sidney spends the night with Camilla Beeput as Gloria Dee, a glamorous vocalist at the jazz club. Yeah, that put me off since Sidney’s supposed to set an example after drinking too much. To be fair, Sidney did feel guilty spending the night with Gloria.

Sidney also confronts Tom Austen as Guy Hopkins, who becomes aware of the young vicar’s attraction to Amanda and decides to have their wedding in London instead. The episode also features Pheline Roggan as Hildegard; Tessa Peake-Jones as Mrs. Maguire and Al Weaver as Leonard.

I do find myself engaged in these early ‘Grantchester’ episodes as I’ve enjoyed Series 1, Episode 5. It was nice to watch some of the DVD special features for Series 1 after watching Episode 5. I wonder how Series 1 will conclude and what Sidney will do with tackling his feelings for Amanda next time. 😐

Here’s hoping my review on Series 1, Episode 6 of ‘Grantchester’ will be up next week.