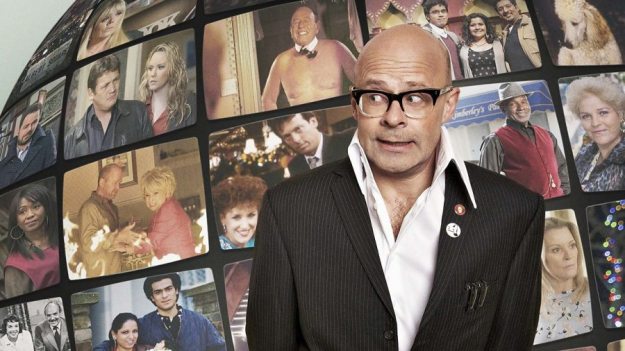 In these current times of uncertainty – please keep safe – we all need something to cheer us up when watching TV. And I’m not talking about ‘Muppets Now’ on Disney+, but don’t worry I’ll get to that eventually. I’m actually talking about the latest show from Harry Hill – ‘Harry Hill’s World of TV’!

I wondered what this new Harry Hill show would be like and whether it’d be something like the thing he did for ‘TV Burp’ back in the 2000s and the early 2010s. I guessed he would use limited resources to edit the material he did, considering we’re in a pandemic and I imagine he recorded the show at home. 😐

So what’s the show about? Well, Harry takes the lid off a different genre of UK TV each week. The current show has six episodes. We’ll see whether each episode will be better than the other and whether it will lead onto a second series or not. For now, let’s talk about how the first episode went.

The first episode has Harry Hill casting his eye over the world of soap operas on TV over the years. This includes ‘Eastenders’, ‘Coronation Street’ and ‘Emmerdale’. There’s also soap operas I’ve not seen including ‘The Grove Family’, ‘The Newcomers’, ‘Crossroads’ and even America’s soap…‘Dallas’!

Harry finds the funny in these soap operas where you least expect it. I’m not really an avid follower of soaps, but I’ve seen Harry make fun of the soaps before in his ‘TV Burp’ show. So, it was fun to watch this episode and see how Harry makes fun of how the soaps are presented to TV audiences. 😀

It starts off well when comparing how an accidental dropping of a beer glass in ‘Corrie’ matches to a dramatic train crash many years later in 2010, I believe. 😀 It’s really amusing when Harry presents the disasters that happen in soap operas, especially with explosive results. I did smile at those bits. 🙂

I admit, the first half of the ‘Soaps’ episode wasn’t as good as the second half. I enjoyed it when Harry made jokes about the people in ‘Eastenders’ who come in and asks for ‘two teas’. It’s just so funny how that’s done many times in ‘Eastenders’ over the years. Nobody realised that in making it!

It was equally funny when someone – a man in ‘Eastenders’ (don’t know his name) kept telling someone to ‘shut his face’ over and over again and with many variations. He even got that from his mother in ‘Eastenders’ who said “Shut your face!” a lot. 😀 It was funny to see the ups and downs of a married couple in ‘Eastenders’.

In one scene they’re lovey-dovey to each other; in another they’re arguing and lashing out at each other in the street. It’s so ironic how long-lasting relationships between couples in soaps can be so inconsistent with that arguing and lashing going on. Amazing some of these soaps have lasted long! 🙂

And of course, who could forget the traditional formula for Christmas episodes in soaps like ‘Eastenders’; ‘Corrie’ and ‘Emmerdale’ where it all ends up in arguments and unhappiness. That’s one reason why I don’t watch soap operas and I liked how Harry points it out in a pretty amusing way. 😀

I did spot one or two actors I recognised who’ve been in soaps like Michael Melia and…Timothy West, I believe. I’m disappointed I didn’t get to see Frazer Hines appearing in ‘Emmerdale Farm’ as it was originally called or even Jenna-Louise Coleman as I’m sure she was called back in ‘Emmerdale’. 😦

Overall, the first episode of ‘Harry Hill’s World of TV’ was enjoyable to watch on a Sunday evening at 8:30pm on BBC2. The second half is better than the first and I’m hoping I’ll get to enjoy more of this show as it progresses. I don’t think it’s good as ‘TV Burp’ or ‘Alien Fun Capsule’, but it is fun viewing.

Stay tuned for my review on the second episode of ‘Harry Hill’s World of TV’ called ‘Medical Dramas’, coming soon next week.