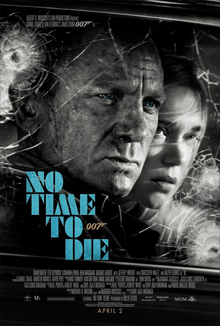 It’s time to talk about a James Bond movie that was meant to come out at cinemas in April 2020, but has sadly been rescheduled to November instead due to the Covid-19 crisis – please keep safe. I’m of course talking about ‘No Time to Die’. I hope I’ll see the movie soon. It seems to be pretty exciting.

Whether I’ll see this movie at the cinema in November 2020 or not, I don’t know. It might be when it comes out on Google Play next year that I’ll see it. Whenever I see it, the new trailer on the movie should give me an idea of what on it’s like. I’m hoping my predictions on this movie will be correct. 🙂

Let’s check out the trailer, shall we?

Like I said, this movie was meant to come out in April this year and I was really looking forward to seeing it at cinemas. I’m not exactly what you would call a big James Bond fan. I have done a few quick reviews on some James Bond movies including the Roger Moore ones and I’ve reviewed ‘Goldfinger’ starring Sean Connery. I’ve also reviewed a few spy thriller things based on James Bond.

I’m not very familiar with the Daniel Craig era of James Bond movies, although I have seen ‘Casino Royale’, ‘Quantum of Solace’ and ‘Skyfall’. I’ve not seen ‘Spectre’ yet. Maybe when it gets closer to the release of ‘No Time to Die’; I might watch the first four Daniel Craig ‘Bond’ films via Google Play.

I did see the first trailer for ‘No Time to Die’ at the cinema when the film was originally meant to come out in April this year. From watching the two trailers I’ve seen, ‘No Time to Die’ looks to be an impressive action-packed James Bond spectacle. I’m sure this film will entertain a lot of Bond fans. 🙂

The film takes place five years after the events of ‘Spectre’. James Bond has left active service and he’s approached to help search a missing scientist called Valdo Obruchev. When it becomes clear that the scientist was abducted, Bond must confront a ‘danger’ of the likes the world has never seen.

As I gather, this is meant to be the fifth and final film of Daniel Craig’s time as James Bond. He’s done well playing Bond in five movies, hasn’t he? I wonder who’ll take over from him. I’m hoping ‘No Time to Die’ will send Daniel Craig out on a high note. This film does have a lot of anticipation going for it.

From watching the trailers, the movie does seem to be set with having plenty of action scenes whether its gun fights; car chases; helicopter chases; explosions and such. There’s also bound to be a lot of saucy sex scenes for James Bond to have with some very beautiful women. Like a traditional Bond movie! It’s amazing that this movie was filmed in 2019 before developments occurred in 2020.

I may not be a big James Bond fan, but I look forward to seeing ‘No Time to Die’ soon. This film; like many others, have been long overdue. I do enjoy a good James Bond movie now and again and I hope this will be a good one. Might have to watch the other Daniel Craig ‘Bond’ moves first before I see this one, but I’m hoping ‘No Time to Die’ will provide a good final outing for the actor in the part.