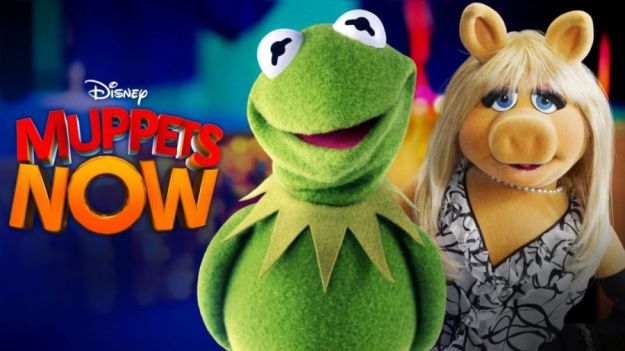 I’m currently enjoying ‘Muppets Now’ on Disney+ and the third episode ‘Getting Testy’ was great to watch. I admit ‘Muppets Now’ isn’t as good as some of the earlier Jim Henson productions of the Muppets like ‘The Muppet Show’, but it still does its job to entertain and give Muppet nostalgia. 🙂

In the third episode of ‘Muppets Now’, Scooter gets forced to host a test-screening for the episode’s segments. The test audience happens to be…Statler and Waldorf. Oh dear! Well, those two old guys are going to be very critical about the Muppets anyway. I wonder why they continue watching them.

I think maybe Staler and Waldorf might be too harsh on the Muppets every time they see them. They even snore their way through a few of the segments. Incidentally, what happened to those pitches Fozzie gave Scooter in the previous episode? I don’t think Fozzie makes an appearance here.

The segments for this ‘Muppets Now’ episode include ‘Økėÿ Døkęÿ Køøkïñ’. In that, the Swedish Chef helps Korean-American chef celebrity Roy Choi to cook a Kalbi rice bowl with kimchi. Watching that segment made me wonder whether I should cook a Kipper of Traken from ‘The Doctor Who Cookbook’! Heck, I’m very grateful to have ‘The Doctor Who Cookbook’ to do home cooking anyway.

The next segment is ‘Muppet Labs Field Tests’ where Dr. Bunsen Honeydew and Beaker conduct experiments on velocity. They have the assistance of a pizza delivery man, played by Al Madrigal. My parents and I found that sketch funny, especially since we were eating Domino’s Pizzas at the time. 😀 Incidentally, I’ve just learnt Al Madrigal is due to appear in the upcoming ‘Morbius’ movie in 2021.

There was another ‘word from Kermit the Frog (and Joe from Legal)’ moment in the episode as well as another edition of ‘Lifesty(le) with Miss Piggy’…or should I say ‘Lifesty(le All Together) with Miss Piggy’. 😀 This had Miss Piggy discussing relationships and it had guest stars like Uncle Deadly, Kermit, Beaker, Brie the Cheese (Hmm) and as usual Taye Diggs and Linda Cardellini who are always there. 😀

I’m curious about whether there’s something going on between Kermit and Linda Cardellini. There probably is. Kermit always has his way with women. 😀 And we have the final segment ‘Pepe’s Unbelievable Game Show’ where Pepe continues to be unpredictable. This has special guests Miss Piggy and Big Mean Carl who judge the contestants in the competitions they perform in the show. It was funny when Big Mean Carl ate one of the contestants. 😀

A shame ‘Muppet Masters’ and ‘Mup Close and Personal’ didn’t show up again in this episode. I believe ‘Muppet Masters’ will return one more time in the fifth episode of ‘Muppets Now’ and ‘Mup Close and Personal’ will return in episodes four and six. I wonder why they’re not in every episode. I wish ‘Muppets Now’ had a ‘Pigs In Space’ segment. Maybe it’ll be considered for a second season. 🙂

Overall, ‘Getting Testy’ was an enjoyable instalment in ‘Muppets Now’. I’m getting into the rhythm and atmosphere of this series on Disney+. I’ve noticed there’s not much singing in ‘Muppets Now’ as opposed to other Muppet productions like ‘The Great Muppet Caper’. Maybe the show should have more singing. Anyway, the segments that got a chuckle out of me is proof that this is an enjoyable show. 🙂

By the way, it was funny when Scooter asked Miss Piggy what she liked about…um, ‘Miss Piggy’ at the end of the episode. “Where to start?” she asked at the end. 😀

Stay tuned for my review on the next ‘Muppets Now’ episode ‘Sleep Mode’ next week!