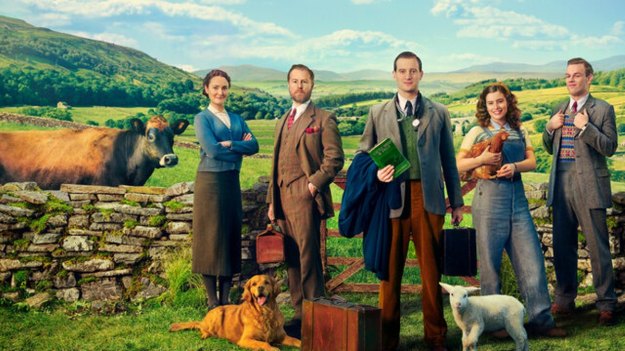 I’ve seen the fifth episode of the new ‘All Creatures Great and Small’ series being shown on Channel 5 called ‘All’s Fair’. My parents and I really are getting into this series. I feel the new series has surpassed my expectations greatly. I’ve even pre-ordered the DVD release of Series 1 on Amazon. 😀

Anyway, this episode, which is the penultimate episode by the way, has Nicholas Ralph as James acting as the attending vet for the Darrowby Show. Now this is interesting because that kind of story has been done in the original TV series, except it was done in Series 2, not Series 1 as it’s done here.

The episode in question from the 1978-1990 series was called ‘Judgement Day’. Now there were certain familiar elements I recognised from the original series episode being put in the new series episode. Except there are arguably noticeable differences in how they adapted from the book to TV!

For one thing, James and Helen aren’t married by this point as in the original episode. Another is that James seemed to fail in his duties as an attending vet for the Darrowby Show whereas here he…sort of doesn’t. The fair also takes place around Skeldale House instead of being in some field. 😐

The reason why I say that James doesn’t sort of fail in this episode as opposed to the original episode is that he stands up to the people who are trying to cheat their way into winning certain events in the Darrowby Show. This includes pony riders that believe their ponies fit the right measurements. 🙂

I don’t know whether that’s a good thing or not but I like how James’ honesty comes into play by the end and he’s commended for it when he’s given a pint by someone. Even Samuel West as Siegfried and Callum Woodhouse as Tristan approve of James’ actions, despite placing bets on him earlier on.

Another difference was that Mrs. Pumphrey and Tricki-Woo weren’t in the new series version of the episode as in the original episode. I would’ve thought Mrs. Pumphrey would’ve brought Tricki-Woo to the pet competition. It would’ve meant another Diana Rigg appearance which I would’ve liked. 😀

An interesting new aspect to Siegfried’s character gets introduced in the series. It turns out, according to Anna Madeley as Mrs. Hall, that Siegfried is a widower. So, Siegfried was married one time. I don’t recall that being the case in the original series. Also Siegfried admires someone in this. 🙂

It turns out there’s a thing going on between Siegfried and Mrs. Hall’s best friend in the series. I liked the scenes between Tristan and Siegfried where the little brother encourages his big brother to pursue a relationship with Mrs. Hall’s friend, even though Siegfried is rather bitter about it in the episode.

There’s not much comedy as there was in the fourth episode in this episode here, but there are some moments that I found genuinely amusing. As well as the placing bets on James stuff, Siegfried and Tristan tend to make funny noises when giving demonstrations during tours for Skeldale House.

There’s an interesting development in the James/Helen romance plot in the series. Apparently, James discovers something wrong with Clive the cow from the previous episode and it seems that Matthew Lewis as Hugh Hulton may have lied to Rachel Shenton as Helen Alderson and her family. 😐

I don’t know if this changes anything regarding Helen and James’ relationship or whether Helen will break up with Hugh Hulton by the time we reach the end of Series 1. Come to think of it, there hasn’t been much of a romance between James and Helen in this series so far as was in the original.

‘All’s Fair’ has been a very enjoyable episode in the new ‘All Creatures Great and Small’ series! I’m very pleased my parents and I have been able to see this series on Channel 5 and I’m happy to report that the series has been renewed for a second season already. What will occur in the final episode?!

Stay tuned for my review on the sixth episode of the ‘All Creatures Great and Small’ 2020 remake called ‘A Cure For All Ills’ for my blog next week.