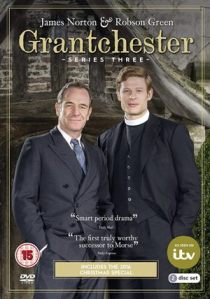 I’m halfway through Series 3 of ‘Grantchester’. Even though I know what’s going to happen in Series 4 and 5 later on, it’s very interesting to see how the first three seasons turn out. I’m curious about how it’ll turn out for Sidney’s relationship with Amanda and for Geordie’s affair with Margaret. Hmm!

In Series 3, Episode 3, a post office robbery takes place. Al Weaver as Leonard gets injured in the process, despite standing up to the robber who’s wearing a gas mask. I couldn’t help but say “Are you my Mummy?” once I saw that. 😀 It even happened in ‘Paddington’ which I re-watched recently. 😀

There is a main suspect behind the post office robbery, but convicted criminal Walter Dunn is found dead before the crime took place. Two of his employees at the garage, Carlyss Peer as Martha Bennett and Tommy McDonnell as Frank Camber, come under suspicion for the murder in the story.

Another post office robbery takes place and James Norton as Sidney suspects it’s an inside job when two robbers are involved. It’s intriguing how the plot twists get unveiled about who did the robberies and who did the murder. They somehow manage to be interconnected with each other. 🙂

Sidney’s personal feelings become torn when he sees Morven Christie as Amanda with her former husband Tom Austen as Guy, unaware that a divorce has been sportingly agreed. It also seems that Sidney and Robson Green as Geordie can’t hold back from falling in love with people they can’t love.

I say that because Geordie is still carrying on her affair with Seline Hizli as Margaret Ward and she even gives him a pregnancy scare. Even though Geordie knows how dangerous it is to keep this affair going, he’s still at it with Margaret without his wife Cathy knowing. Cathy doesn’t even appear in this.

In the end, Sidney chooses his own happiness over doing the decent thing when he knocks on Amanda’s door and immediately makes love to her. I know Sidney and Amanda truly love each other, but I can’t help feel that this is going to be doomed to disaster. What will happen next? Hmm!

There’s also an interesting development when Leonard must mask his true sexuality with a marriage proposal to his friend, Emily Bevan as Hilary Franklin. Firstly, the two have known each other for three episodes. Secondly, Sidney knows that what Leonard’s doing isn’t true to his nature, so why even do it?

I enjoyed Series 3, Episode 3 of ‘Grantchester’. I can’t deny that it’s not as good as the previous episode with Peter Davison ( 😀 ), but I’m intrigued as to what will happen next in the love lives of Sidney, Geordie and now Leonard. I can imagine things won’t turn out well for either of these three.

Here’s hoping my review on Series 3, Episode 4 of ‘Grantchester’ will be up next week.