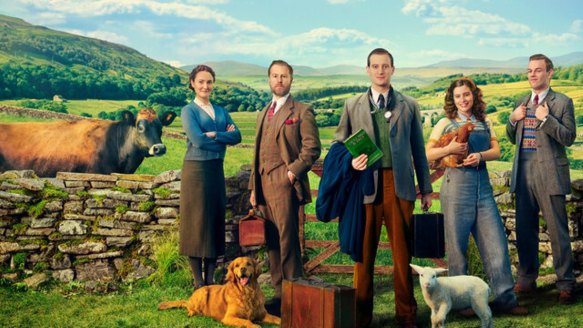 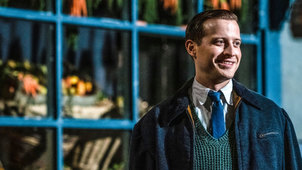 I’ve seen the sixth and final episode of 2020’s ‘All Creatures Great and Small’ on Channel 5 called ‘A Cure For All Ills’. I’m so pleased my parents and I saw this remake series of ‘All Creatures’. It’s certainly different from the original 1978-1990 series, but it’s definitely good as the original series. 🙂

The acting, the atmosphere and the tone of this series has been very good, matching to what’s in the original show. That’s something I didn’t think the 2020 remake series would do very well, but it surpassed my expectations. I’m really happy with how the show’s first season ended on a good note.

In the episode, it’s a day before James’ birthday. But professional duties get in the way as Nicholas Ralph as James attends to a poor cow that’s got an abscess in the windpipe. James does all he can to cure the cow and soon has Callum Woodhouse as Tristan help him to perform a delicate operation. 🙂

What I like about this episode as well as the series overall is how James develops confidence in being a professional vet. At the start, he was inexperienced. By this point, he proves to Samuel West as Siegfried he can save a sick cow’s life, even though he’s aware of the risks involved in an operation. 🙂

I liked how James and Tristan worked together to find the solution in curing the cow, despite the operation being risky. Siegfried is against the idea, telling James not to go through with it. But halfway through the episode, James is determined and has all the help he can get in saving the cow.

I also like how Rachel Shenton as Helen Alderson provides James the courage to go against Siegfried’s decision not to operate on the cow and to do what he believes is a chance of saving the cow’s life. Throughout the series, Helen has been a moral support for James, despite not dating him.

Siegfried has been great to watch in this episode. Despite going against James and Tristan’s plan to operate on the cow, he has some very amusing comedic moments especially when he’s ill, echoing a similar situation for Siegfried in ‘Golden Lads and Girls’ from the original series. Yes, I picked up on that!

In the end, Tristan does all the hard work in surgery at Skeldale House whilst Siegfried’s upstairs in bed. It was funny when Siegfried, rather than approving of Tristan’s hard work, is disappointed when he sees his brother has drawn illustrations of Greta Garbo on the back of his ‘mock exams’. Whoops!

Siegfried gives Tristan a right telling off. If this was shown as the second episode of the series, I probably wouldn’t have laughed at that. But because I’ve been getting used to Samuel West as Siegfried’s eccentricities, I couldn’t help but laugh at that scene as I was watching the episode on TV.

Because of James’ success with getting rid of the abscess in the cow (with ghastly shots of the abscess draining out, which I don’t think we needed to see – it’s like the original series again), Siegfried makes him his new senior veterinary partner. I’m pleased! James deserves that promotion.

Sadly, James hears from Helen that she’s become engaged to Matthew Lewis as Hugh Hulton. Oh dear! Won’t James ever find true love with Helen Alderson in this ‘All Creatures’ series. I wonder if it’s going to be resolved in the upcoming Christmas Special or in Series 2. I’ll have to wait to find out.

Ah well! At least James got his birthday present from his mum which was a hat and scarf. Overall, ‘A Cure For All Ills’ has been a satisfying conclusion to Series 1 of 2020’s ‘All Creatures Great and Small’. I enjoyed the series very much. It had a rocky start in the first two episodes, but gradually I’ve grown to like the series and enjoy the characters. It’s not the same as the original, but it’s just as good here.

Stay tuned for my review on the upcoming Christmas Special of the ‘All Creatures Great and Small’ 2020 remake series coming soon to my blog.