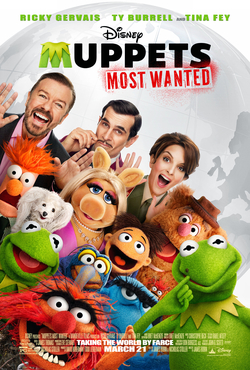 It’s a Muppets day today, isn’t it? After we saw the first episode of ‘The Muppets’ 2015 series on Disney+, my parents and I watched the movie ‘Muppets Most Wanted’ next on Disney+ This Muppets movie is the sequel to ‘The Muppets’ 2011 film and it was shown at the cinemas in 2014. 🙂

I didn’t see this movie when it came out at cinemas in 2014, though I did purchase the DVD of it whilst on holiday that summer. I didn’t think much of the movie when I saw it on DVD and eventually I gave it away to someone. Now I’ve seen it again on Disney+, I can share some proper thoughts on it.

First off, I don’t think ‘Muppets Most Wanted’ is as good as the 2011 ‘Muppets’ film. For one thing, Jason Segel and Amy Adams don’t return to play their characters from that film. We only see the backs of them at the beginning from the end of the first movie and I don’t think it’s even them here.

I think it would’ve been good to have had Jason Segel and Amy Adams return in this film for continuity’s sake, despite Walter appearing in it. With that said, I do think ‘Muppets Most Wanted’ has some merit. Watching the film again on Disney+ has been more enjoyable than seeing it on DVD.

In the movie, the Muppets become involved in an international crime caper. And no, that’s not ‘The Great Muppet Caper’. I’ve seen that and it’s different to this. It actually involves the Muppets going on a world tour in Europe where Kermit the Frog gets replaced by a lookalike frog called Constantine. 😮

Constantine is a criminal mastermind with a mole on his lip. I actually find it funny that there are two lookalike frogs in Kermit and Constantine, even Constantine doesn’t sound exactly like Kermit. Kermit gets framed for a crime he didn’t get commit and Constantine plots to steal certain treasures.

Performing their Muppet world tour in Europe, the Muppets are unaware of Kermit being replaced by Constantine whilst he hosts the show and does underhanded crimes. Walter, Fozzie and Animal are soon aware of Kermit’s disappearance and must rescue their froggy friend from a Siberia prison.

Kermit also must stop a wedding happening between Constantine and Miss Piggy (who is unaware her Kermit is actually Constantine). Will Miss Piggy see through the two frogs to discover which one’s the real Kermit? Maybe she’ll give Constantine a good hiding in a helicopter once the film finishes. 😀

Like many ‘Muppet’ movies, there are a good number of guest star cameos. This includes Tony Bennett (whom my Mum and Dad know of); Hugh Bonneville and Tom Hollander of all people; Lady Gaga; Toby Jones; Salma Hayek; Tom Hiddleston; Frank Langella, James McAvoy, Miranda Richardson, Saoirse Ronan, Stanley Tucci and Danny Trejo (who was in ‘Muppets Now’ recently). I’ll have to watch the movie again to see if there are any guest cameos I’ve missed here. 😀

By the way, I found it funny when the movie came to an end and Tina Fey as Nadya’s solo song number was cut with the end credits coming up, much to her annoyance. 😀 The songs for this film include ‘We’re Doing a Sequel’, ‘I’m Number One’, ‘I’ll Get You What You Want’ and lots more songs.

Overall, ‘Muppets Most Wanted’ is a very entertaining ‘Muppet’ movie to sit down to. I wouldn’t say it was as good as the 2011 ‘Muppets’ movie, but it’s not terrible. There are some over-the-top song numbers to be found here, but I enjoyed the comedy aspects as well as two Kermit the Frogs. 😀