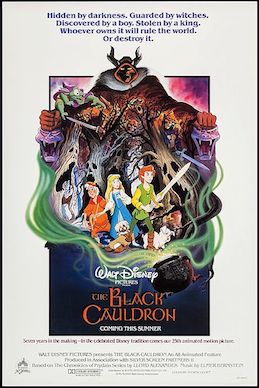 After seeing two episodes of the 2015 ‘Muppets’ series on Disney+, my parents and I went into seeing a 1985 Disney movie called ‘The Black Cauldron’ via the same streaming service. I have been resisting this movie for quite some time, but after all these years, I’ve finally seen it. Was it worth it?

Well, it’s not exactly the kind of Disney movie I would like to see again and again. It’s certainly braver than some of the other Disney movies I’ve seen, with its use of darker imagery and black magic. But I didn’t find it all that exciting and it felt rather average. I know this film tends to divide some opinion.

‘The Black Cauldron’ is loosely based on the first two books in ‘The Chronicles of Prydain’ by Lloyd Alexander. I’ve not come across those books before, but it turns out they’re based on Welsh mythology. Interesting! The story is set in the mythical land of Prydain during the Early Middle Ages.

I’ve checked with my Mum and apparently ‘Prydain’ is the modern Welsh name for Great Britain. I don’t know why ‘The Chronicles of Prydain’ couldn’t be set in Wales itself and be called ‘The Chronicles of Cymru’ instead. The names Eilonwy and Fflewddur Flam also sound Welsh-sounding. 😀

A young pig keeper named Taran has to protect a remarkable pig called Hen Wen who can predict the future. And yes, I know how ridiculous that sounds but this is Disney for you. 😀 Hen Wen can reveal the location of the Black Cauldron which the wicked Horned King wants to conquer the world.

After losing Hen Wen on his journey, Taran is soon helped by the young princess Eilonwy, the bard Fflewddur Fflam and a wild and slightly annoying cowardly creature called Gurgi. They have to overcome obstacles in order to prevent the Horned King achieving his plans with the Black Cauldron.

The movie is often unbalanced in terms of wanting to be light-hearted humour as well as being dark and foreboding. I imagine ‘The Black Cauldron’ is more like the animated ‘Lord of the Rings’ movie (which I haven’t seen yet. I must do someday) as opposed to the recent Peter Jackson ‘LOTR’ trilogy.

There are some interesting names in the cast list for ‘The Black Cauldron’. Whilst Taran is voiced by Grant Bardsley (never heard of him 😀 ), Princess Eilonwy is voiced by Susan Sheridan, who played Trillian in the BBC radio series ‘The Hitchhiker’s Guide to the Galaxy’. I thought I recognised the name. 😀

Dallben the Enchanter, whom Taran works for at the small farm of Caer Dallben, is voiced by Freddie Jones, who played Humpty Dumpty in ‘Alice Through The Looking Glass’ with Sarah Sutton. 🙂 Fflewddur Flfam the bard is voiced by ‘Yes Minister’ and ‘Yes Prime Minister’s Nigel Hawthorne here.

Gurgi, voiced by John Byner, is almost a bit like Gollum, despite being hairy and fluffy. I don’t really know what to make of him. Sometimes he can be amusing but other times you just want him to stop talking and being silly. Maybe he was an inspiration for Jar Jar Binks in the ‘Star Wars’ prequel films.

Amazingly, the Horned King is voiced by John Hurt of all people. For me, John Hurt would go on to play the War Doctor in ‘Doctor Who’, both for TV and Big Finish audio. It was nice to hear his voice in another movie. I’ve also found out John Hurt voiced Aragorn in the animated ‘Lord of the Rings’ film.

Interesting to note, ‘The Black Cauldron’ almost put the Disney movie-making business in jeopardy when it became a commercial failure at the time. I suppose ‘The Black Cauldron’ is considered a cult classic nowadays and I certainly enjoyed it on Disney+. But then, I wouldn’t consider this a must-see again film.