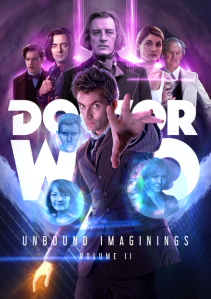 It’s nice to see my name twice in a ‘Doctor Who’ title sequence! 😀 2020 hasn’t been a great year for many of us (including me), but I’m so happy to be part of a brand-new anthology release by the Divergent Wordsmiths this year. It’s called ‘Unbound Imaginings, Volume 2’ and I’ve done two new stories for it.

‘Unbound Imaginings, Volume 2’ features alternative versions of ‘Doctor Who’, whether it’d be different Doctors played by different actors or alternative takes of certain Doctors and/or companions in certain stories. I had a fun time writing the two latest stories I did for the Divergent Wordsmiths featuring the ‘unbound’ concept.

The two new stories by me in ‘Unbound Imaginings, Volume 2’ are as follows. There’s ‘The City of the Bad Wolf’ featuring Trevor Martin’s Fourth Doctor, Jenny and Jimmy from the stage show ‘Seven Keys to Doomsday’ which has been adapted into audio by Big Finish. And there’s ‘Into the Death-Space’ featuring Nyssa and Billy from my ‘Fifth Doctor by Tim Bradley’ series on ‘Bradley’s Basement’.

There are other stories by other writers in the collection as well as me. Overall, ‘Unbound Imaginings, Volume 2’ was edited by Alan Camlann (Wolfie, whom you may have encountered in my ‘Avengers: Infinity War’, ‘Avengers: Endgame’ and ‘Mandalorian’ reviews 😀 ) and Andrew Hsieh (who produced the above title sequence (Thanks Andrew) and contributed stories to the collection too.) 😀 The other stories in the collection are by writers like Kevin M. Johnston; Chris Taylor, Marshall Tankersley, Noé Géric, Andrew Hsieh, Tom Hannah-Golden, and Cecil J. Finchley.

The other stories feature various Doctors and companions including an alternative Fifth Doctor and Tegan, Rowan Atkinson’s Ninth Doctor from ‘The Curse of Fatal Death’, an alternative Tenth Doctor who turns into an alternative Eleventh Doctor played by Jacob Dudman with alternative versions of Ameila Pond and Rory Williams (I believe), an alternative First Doctor, an alternative Thirteenth Doctor, etc. The anthology has a foreword by Joshua Wainsko (who wrote Big Finish’s ‘Forever Fallen’) and an afterword by J. A. Prentice (who recently wrote ‘The Undying Truth’ in ‘The New Adventures of Bernice Summerfield: Lost in Translation’ by Big Finish). There’s also an introduction called ‘Ask Nicely’ by Alan Camlann.

Here are links to pages on my blog for ‘The City of the Bad Wolf’ and ‘Into the Death-Space’. Here is also a link to the ‘Unbound Imaginings, Volume 2’ anthology on the Divergent Wordsmiths website. Go to page 43 for ‘The City of the Bad Wolf’ featuring Trevor Martin’s Fourth Doctor, Jenny and Jimmy and go to page 148 for ‘Into the Death-Space’ featuring Nyssa and Billy.

I hope you’ll enjoy my two new stories as well as the other stories by the other writers in this special anthology release.

There’s also ‘Psychic Image’ from the ‘Genesis of Terror’ collection by the Divergent Wordsmiths to check out as well as ‘The Crimson Lion’ and ‘The Popiz’ from ‘The Paul Spragg ReCollections’ collection to check out. 🙂

P.S. There are some Easter Eggs to look out for on a certain page of the ‘Unbound Imaginings, Volume 2’ anthology. Look hard and I’m sure you’ll be able to find them! 😀